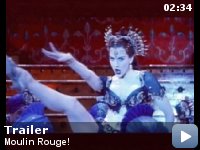 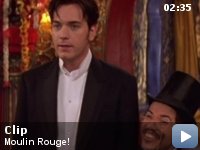 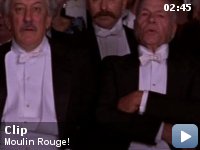 A poet falls for a beautiful courtesan whom a jealous duke covets in this stylish musical, with music drawn from familiar 20th century sources.

Storyline
The year is 1899, and Christian, a young English writer, has come to Paris to follow the Bohemian revolution taking hold of the city's drug and prostitute infested underworld. And nowhere is the thrill of the underworld more alive than at the Moulin Rouge, a night club where the rich and poor men alike come to be entertained by the dancers, but things take a wicked turn for Christian as he starts a deadly love affair with the star courtesan of the club, Satine. But her affections are also coveted by the club's patron: the Duke. A dangerous love triangle ensues as Satine and Christian attempt to fight all odds to stay together but a force that not even love can conquer is taking its toll on Satine…

Nini Legs In The Air

Taglines:
This Story Is About Freedom

During Satine's trapeze entrance, blue light was used due to Nicole Kidman's pale skin tone, the director found that the blue light made her almost "glow" and therefore stood out during the scene.

Continuity:
When Satine is shoving the Duke out of the elephant at the end of one scene, he is fully out the door but in the next shot she is shoving him out of the door.

Toulouse-Lautrec:
[singing]
There was a boy, a very strange enchanted boy…

The most original and groundbreaking movie of recent history

I have seen Moulin Rouge at least 25 times. I think it is the most
extraordinary movie of my generation and breaks every limit set by the
industry. I have heard all the traditional complaints…people didn't
like
the music, the editing was too swift, or it wasn't "their taste". Moulin
Rouge took a risk. A risk films like A Beautiful Mind and Shakespeare in
Love don't. It risked by being controversial. To make a likeable movie
isn't hard, follow the Hollywood mold and stick in a few attractive
actors,
some bland dialogue and viola you have a film. Moulin Rouge was made
knowing that not everyone would like it, but knowing everyone would at
least
appreciate it for its artistic ingenuity. Visually it is superb, an
indulgent feast for the eyes with every breathtaking, artistic scene.
Everything about it is over the top, every scene more stunning than the
next, and as it continues your heart becomes more and more intertwined in
the love story. The editing in the Roxanne scene rushes through your
body
and is the most incredible of any movie in history. Nicole Kidman and
Ewan
McGreggor are the most passionate on-screen couple; entirely convincing
as
their voices meld them together into one. Never has a movie done what
Moulin Rouge did. It realized that the world of film is only being
represented in one small way, whereas Moulin Rouge uses a camera and
screen
to make something bigger and more extraordinary than has ever been made
before. It pushes against the confines of convention and leaves you
breathless.