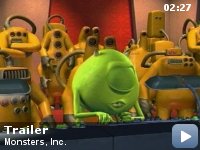 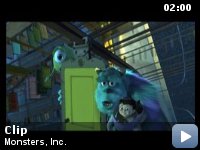 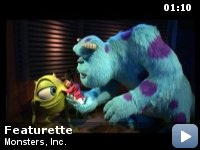 Monsters generate their city's power by scaring children, but they are terribly afraid themselves of being contaminated by children, so when one enters Monstropolis, top scarer Sulley finds his world disrupted.

Storyline
In a city of monsters with no humans called Monstropolis centers around Monsters, Inc., the city's power company. Monsters, Inc. The lovable confidant, tough large, furry blue behemoth-like giant monster named James P. Sullivan (A.K.A. better known as Sulley) and his Cyclops wisecracking best friend short, green monster with one large eye, Mike Wazowski discover what happens when the real world interacts with theirs in the form of a 2-year-old baby girl dubbed "Boo," who accidentally sneaks into the monster world with Sulley one night. And now it's up to Sulley and Mike to send Boo back in her door before anybody and especially two evil villains such as Sulley's main rival as a scarer chameleon-like Randall(a monster that Boo is very afraid of), who possesses the ability to change the color of his skin and Mike and Sulley's boss Mr. Waternoose the chairman and chief executive officer of Monsters, Inc.

Taglines:
Monsters, Inc. : We Scare Because We Care

Bill Murray was considered and tested for the role of Sulley, but the director, Pete Docter, said that when the filmmakers decided to offer it to Murray, they were unable to make contact with him and took that to mean "no".

Continuity:
The scoreboard on the video wall sometimes shows decreased values for some monsters, for instance when Waternoose talks to Jerry and just before the first 2319.

Flint:
Uh-huh, Mr. Bile, can you tell me what you did wrong?

Bile:
I fell down?

Now here's a story children and adults can relate too. Monsters in the closet.

While monsters in the closet may seem to be a scary reality for some
children, `Monsters, Inc.' makes it light hearted by showing them it's all
in a night's work. The characters are as charming as the cast that speaks
for them.

It's a learning experience children get to see how an industry works.
Monsters, Inc. is an in-genius corporation that has scientifically learned
how to channel children's screams into energy that is used for electrical
power. It has monster employees, an assembly line of doors (which give
monsters access to children's bedrooms), a top-flight training program and
some of the top Monsters in the scaring business.

There's a colorful Metropolis, filled with houses, buildings, businesses,
cars and everything that makes a city run smoothly along with a population
of colorful creatures. One of the colorful groups of creatures is the
yellow swat team. Their job is to protect the Metropolis of Monsters,
Inc.
from human contamination.

But what happens when a human child mysteriously gets through the bedroom
door and terrorizes the city with screams and boo's. It's wondrous and
funny. In the mist of all this is industrial crime, brought on by greed.
But, the story ends on a very happy note.

John Goodman is the voice of `Sulley' a colorful large blue-green ape like
monster who's the star Monsters, Inc. employee. He's some type of
monster,
cut, cuddly, and he has a conscience that leads him to feelings of regret
about scarring children. He becomes attached to Boo (voice of Mary Gibbs)
a
cute, little big-eyed girl who is mysteriously brought to Monsters, Inc.
and
in his quest to return her home becomes very attached to
her.

Sulley's best friend is Mike (voice of Billy Crystal) who's a funny
looking
green ball with stick legs and one huge eye. His comedy is seen through
out
the movie. Mike is Sulley's driving force, acting as his agent. Mike's
job
is to make sure Sulley remains the top Monsters, Inc. employee. But when
it
comes to laughter Mike proves he's on top.

Mike's girl friend Celia (voice of Jennifer Tilley) is the stylish
employee
who has Mike's best interest at heart. Her job is to keep him out of
trouble.

I give Monsters, Inc. a ten. It is an animated movie that can be enjoyed
by
the whole family. It makes for great family fun.