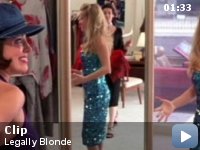 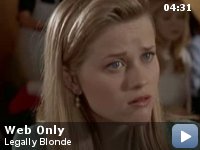 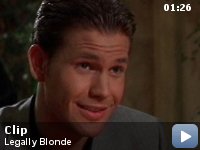 When a blonde sorority queen is dumped by her boyfriend, she decides to follow him to law school to get him back and, once there, learns she has more legal savvy than she ever imagined.

There is a quick shot of a TV truck from WAJB, Channel 3 in Boston. This fictional channel is a reference to the author of the novel on which the script is based, Amanda Brown.

Continuity:
Elle's hair is alternately smooth/wispy between shots when she talks to Vivian in her dorm room.

Serena:
Elle, we came to see your trial and look! There's like a judge and everything… and jury people.

Avoids the Stereotypical and Worn Roots of Previous Girl-Power Comedies…

I didn't go into "Legally Blonde" expecting too much. I rarely go to actual
movie theaters to see a film (I usually rent videos/DVDs), but I got an
advance on this one, and I was kind of sad it had to be this film I was
going to see, but I had been invited along with two other people to see it
and I wasn't going to say "no" for no reason. So I went.

One of the persons I went with just wanted to see Reese Witherspoon in a
Playboy bunny costume, so I figured I was in for another average
run-'o-the-mill sex comedy. But I was very surprised with the
outcome.

So many girl-power comedies these days are made just for the sake of trying
to prove a point that women are equals to men (I suppose that's the message
behind it–what else was "Now and Then" made for?) and/or support for women.
Fortunately, the 2001 hit "Legally Blonde" is not only a pleasant surprise,
but an intelligent film, as well. (Sorry, that was my main "gripper" for
this review and I had to leave it in.)

Reese Witherspoon plays California sorority girl Elle Woods. Unlike other
people her age that are worrying about grades in school, Elle only worries
about what toilet paper is the softest. But after her boyfriend dumps her
and goes off to Harvard Law School, Elle is determined to go to Harvard and
get her man back. So after putting together a very shallow video for the
chairmen of Harvard, they accept her into the prestige college (because of
her innocent sexuality, no doubt, as we see them gaping at Elle in a bathing
suit on the video), and she packs her bags and heads off to Harvard with her
little dog Bruiser; as the ads say, "Boldly Going Where No Blonde Has
Gone."

"Legally Blonde" doesn't give up on the plot and completely divulge into
dumb blonde/sex jokes. This film not only has a funny–if ridiculous–plot,
but the jokes are, surprisingly, NOT crude sexual jokes. This film is not
another "Scary Movie" made for teens: It has divinely orchestrated comic
timing.

Sometimes the plot gets a bit too heavy–the whole teacher-hitting-on-Elle
thing is a bit stereotypical for a film like this–but in the long run it
seems to break away from the typical girl-power comedy.

Reese Witherspoon tends to play the same characters a lot, but hey, if she
can pull them off, good for her. I don't mind if all her characters tend to
be the same (to a certain extent) because they tend to be quite funny and
cute–who can't laugh at her Elle Woods persona?

In the end, not only does "Legally Blonde" come off very funny, but also
very witty, good-natured and sweet: One of the most pleasant surprises of
2001, indeed.