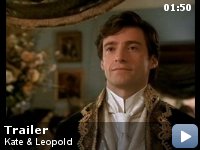 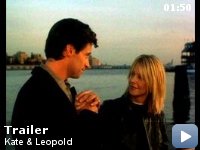 Kate and her actor brother live in N.Y. in the 21st Century. Her ex-boyfriend, Stuart, lives above her apartment…

Storyline
Kate and her actor brother live in N.Y. in the 21st Century. Her ex-boyfriend, Stuart, lives above her apartment. Stuart finds a space near the Brooklyn Bridge where there is a gap in time. He goes back to the 19th Century and takes pictures of the place. Leopold — a man living in the 1870s — is puzzled by Stuart's tiny camera, follows him back through the gap, and they both ended up in the present day. Leopold is clueless about his new surroundings. He gets help and insight from Charlie who thinks that Leopold is an actor who is always in character. Leopold is a highly intelligent man and tries his best to learn and even improve the modern conveniences that he encounters.

Taglines:
If they lived in the same century they'd be perfect for each other.

Errors made by characters (possibly deliberate errors by the filmmakers):
When Kate reads the letter of apology from Leopold, he asks her to "except" his apology, instead of accept.

Roebling:
Time. Time, it has been proposed, is the fourth dimension. And yet, for mortal man, time has no dimension at all. We are like horses with blinders, seeing only what lies before us. Forever guessing the future and fabricating the past.

If you can accept the totally ridiculous premise of KATE AND LEOPOLD and
enjoy romantic fantasies of this sort, you'll find yourself drawn into the
plot because of the very charismatic HUGH JACKMAN. He is the main reason for
watching and carries the film on his sturdy shoulders, so adept is he at
being a "knight in shining armor".

As for MEG RYAN, she is giving her usual Meg Ryan schtick–a sort of
slightly brighter version of Goldie Hawn–but here it doesn't matter because
Jackman manages to steal every scene he's in. BRECKIN MEYER is excellent as
her boorish brother who learns a few things from his 18th Century friend
about manners and etiquette. But it's the time travel aspect of the story
that is its weakest link.

Highly recommended as a romantic comedy that owes much of its charm to the
performance of its leading man–an actor of remarkable skill whose hunky
presence dominates much of the movie.

It's the sort of romantic fluff that would have starred JEAN ARTHUR and GARY
COOPER had it been made in the '30s. The New York location photography is
excellent.