Final Fantasy: The Spirits Within 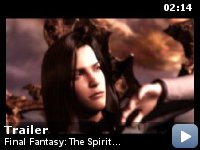 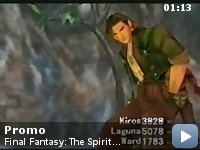 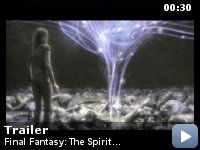 A female scientist makes a last stand on Earth with the help of a ragtag team of soldiers against an invasion of alien phantoms.

Storyline
In the year 2065, the next great assault against an invading race of phantom-like aliens is about to be launched. Dr. Aki Ross, a brilliant young scientist, races to find the invaders' secrets, not only to save the planet, but herself as well after her body is infected by alien particles. She teams up with the prestigious Deep Eyes military squadron, led by her old friend Grey Edwards. But as Aki, her mentor Dr. Sid, and Grey work toward a peaceful end, the scheming General Hein devises a plot to eradicate the aliens in one swift, destructive blow…even if it destroys the Earth right along with them.

Taglines:
Truth In Every Dream

All backgrounds are hand painted.

Continuity:
After Aki removes the phantom particles from Gray, she picks up a canister that's hovering in the air, when she originally placed it on the table further away.

The right movie for the wrong audience


It's a pity this movie failed at the box office, because in my opinion,
it's really good. It combines combines the classic dystopic sci-fi
future with a scorched Earth, a few heroes struggling against enigmatic
aliens and a corrupt military force, action style sequences that are at
times quite intense, and the typical slow-paced Asian movie
storytelling. Add to this a rich amount of influences from the FF
games, including eight mysterious spirits that must be found in time or
the heroine will succumb, as well as a lot of mythological references
that must be taken for granted rather than analysed to bits if the
viewer is to find any pleasure in this film.


The trouble is that the FF video game fans wanted a story based on the
games, or on their particular favourite in the series, and were
disappointed with both the story, the setting and the characters. The
average sci-fi movie fan, though, who ought to have loved the wicked
general (excellently voice-cast by James Woods) and his huge space
cannon, as well as the 'Aliens' styled surroundings and technology, was
put off by all the talk about spirits and world souls. Leaving for a
few of us who went to see the film with no real expectations, to enjoy
it.

Because it is a good film. The animation is, for the most part,
excellent, even if some scenes have a too blatant 'look what we can do'
boast to them. Particularly all the scenes of Aki's hair waving in the
wind. Personally, I didn't think the story was either too slow-paced,
nor too weird. It works well, especially if you like Asian movies. For
the European and American market, though, there's probably not enough
action and too much talking.

If this movie had been released this year, it would probably have been
given a better reception. The thought of fully computer animated films
isn't as new and strange anymore, and with films like Crouching Tiger,
Hidden Dragon, The Ring and Hero, the west is opening up for the Asian
way of telling stories. I hope to see more films like this, at least if
they are this well made. 9/10