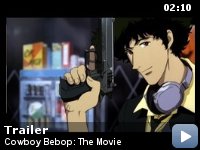 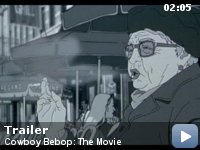 A terrorist explosion releases a deadly virus on the masses, and it's up the bounty-hunting Bebop crew to catch the cold-blooded culprit.

Storyline
The year is 2071. Following a terrorist bombing, a deadly virus is released on the populace of Mars and the government has issued a 300 million woo-long reward, the largest bounty in history, for the capture of whoever is behind it. The bounty hunter crew of the spaceship Bebop; Spike, Faye, Jet and Ed, take the case with hopes of cashing in the bounty. However, the mystery surrounding the man responsible, Vincent, goes deeper than they ever imagined, and they aren't the only ones hunting him. The original creators of the virus have dispatched Electra to deal with Vincent and take out anyone who may stumble on the truth behind him. As the hunt for the man with no past and no future continues to escalate, they begin to question what about the world is reality and what is a dream as the line between sanity and insanity becomes more apparent.

Taglines:
They're here to save the planet. But not for free.

Cowboy Bebop: Tengoku no tobira began production as soon as the final episode of Cowboy Bebop was aired in Japan.

Continuity:
When Spike chases the Moroccan out of the shop, and is searching for him in the crowd, his jacket jumps about between shots.

Lee Samson:
Twentieth century games are really nice. Games nowadays are getting boring. I'm more into old school games like this one. Back then, games like these were enough for everyone. It's the same with hackers. It was better when there were few. Then, even the smallest thing left you in the history books. Now, protection is tighter everywhere. Unless you do something really big, no one will know you. That's why I am grateful towards you, seriously. I always wanted to… try being a terrorist.
[a policeman stops the car. Lee loses the game]

an extended jam on an established theme, with improvisations

I'll try to avoid echoing other comments here and cut straight to the chase:
This is not perfect, but MAN it's so close. I had some trouble with the
pacing, which seemed a bit slow to me–as if they weren't quite sure how to
work with a feature-length timeframe; I'm still a bit hazy on just how the
villain's threat was resolved, which I'm usually not after a CB episode; and
gosh, *why* isn't "Tank!" on the soundtrack? Songs with words just don't
cut it in a CB score. –But honestly, those seem like such small problems
next to everything that's wonderful about this movie. It has all the stuff
you love about Bebop the series: the brilliant, flashing action and fight
sequences, the character interaction, Spike's nicotine jones =), the
gorgeous cinematic visuals, and the dreamlike melancholy that underlies even
the funniest moments. The villain, his grip on the fantasy/reality divide
completely erased after a genetic experiment on Titan, makes a neat
counterpoint to Spike, forever haunted by his dreams of the perfect future
he once believed in. Jet's protective concern for his reckless teammates was
never better painted than in a scene where he blusters about how much
happier he was without any of them and couldn't care less where they are,
only to pounce on the phone's first ring like a worried mom on date night.
There's just a *little* more of Faye's skin for the fanboys (but only a very
little bit more, honest! we're not talking topless here! x my heart!), Ed
has a trick-or-treat encounter that would never make it to American TV, and
even the Big Shot duo put in an appearance (despite having absolutely
nothing to say).


It's not intended as a wrap-up or finale to CB the series; it occurs in
between episodes and should be thought of that way, as an experimental
episode both different from and similar to the original sessions. Kind of
like an extended jam on an established theme, with improvisations, in the
true bebop style.