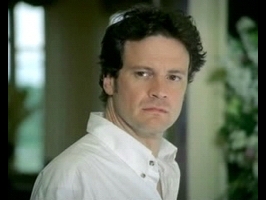 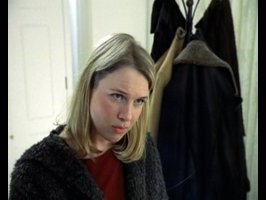 A British woman is determined to improve herself while she looks for love in a year in which she keeps a personal diary.

Storyline
Bridget Jones is an average woman struggling against her age, her weight, her job, her lack of a man, and her many imperfections. As a New Year's Resolution, Bridget decides to take control of her life, starting by keeping a diary in which she will always tell the complete truth. The fireworks begin when her charming though disreputable boss takes an interest in the quirky Miss Jones. Thrown into the mix are Bridget's band of slightly eccentric friends and a rather disagreeable acquaintance who Bridget cannot seem to stop running into or help finding quietly attractive.

Taglines:
NOW Vote Bridget – A True Party Girl. I Pledge To: – Introduce tax relief for singletons – Make it law that men must call the next day – Cut the price of Chardonnay by 50 pence a litre [During 2001 UK General Election]

When Bridget is having dinner with Shazza, Jude and Tom and asks what they would do if their employee did a "harmless little mistake like that" we are led to believe that she's referring to the F.R. Leavis incident. But in one of the scenes that were cut it shows Bridget (on the same day) pitching a marketing idea to one of their writers, the only problem is that she mistakes Michael Naughton the author of "Teddy knows best" for Michael Harper the author of "The red door". This is what she was referring to in the original scripted version of the film.

Audio/visual unsynchronized:
As Daniel and Mark push their way into the restaurant, Bridget is heard shouting "No,no,no,no!" as she runs across to stop them, but her mouth doesn't move.

Bridget:
[as Una Alconberry]
No, Pam. Besides, the gravy needs sieving.

Delightful, witty, and sexy – a TRIUMPH!

As a huge fan of the books, I had incredibly high expectations of the movie.
In order for the movie to work for me, it had to capture Bridget's
plucky-heroine character and the hilarious-poignant emotions that are in the
book. Needless to say, `Bridget Jones's Diary' the movie worked very, very,
very well. Although Helen Fielding also wrote the screenplay (w/ Richard
Curtis, very skilled with romantic comedies) and keeps the laughs coming,
this movie could have fallen flat on its face. But it doesn't because one,
the casting is absolutely divine and two, smartly builds on some elements
the book downplays.


Renee Zellweger is absolutely perfect as Bridget Jones. She has always been
one of my favorite actresses and here, she totally displays Bridget's
pathetic cuteness. Zellweger gained weight for this role, too, so she looks
adorably plump. It's very, very hard to not fall in love with her the
moment you see her at her family's Christmas party or drinking alone at home
or listening to sad, Celine Dion music. (You have a heart of stone if you
aren't moved to laughs or tears or pity for her.) I can't imagine anyone
else playing Bridget Jones. Zellweger fits the role because she is very
much normal and approachable…we can relate to her.

As Daniel Cleaver (her caddish Cassanova lover/boss), Hugh Grant is
smoldering and hilarious. (Ok, I might be a little biased because I've been
in love with him for ages and ages, but you can't deny he is a great comedic
actor.) There's no trace of his stuttering that we saw (and I loved) in
`Four Weddings and a Funeral' or `Sense and Sensibility.' Grant morphs
effortlessly into a cad that we all love to hate and all love to love. Yes,
it's a paradox, but that is what Grant brings to his role. He makes being
`bad' look so sexy. You can't take your eyes off him; he brings his own
humor to his role. It's lovely, smoldering, and incredibly sexy.

Colin Firth is also a delight to watch onscreen as Mark Darcy (I think I
might be in love with him, too). He is also sexy and smoldering, but not in
the same wild, fiery way as Daniel Cleaver. Firth brings a very cute
sweetness to his role. I don't know if it is his adorable face or his hair
or the way he dresses or just the fact that he is a major sex symbol, but
you can't help but fall in love with him the MOMENT you see him onscreen.
There is also one very beautiful moment where he tells Bridget, `I like you
very much…just the way you are.' It's incredibly romantic and, for me,
ranks right up there with Tom Cruise's `You complete me' in `Jerry Maguire.'
He also has rather explosive chemistry with Renee Zellweger, which is
moving and sexy all at the same time. (And, of course, the author Helen
Fielding used Colin Firth as the basis for Mark Darcy, so it all works out
marvelously.)

I also mentioned that the movie smartly builds on some elements that the
book downplays. Yes, there are certain parts of the movie that cannot be
found in the book, but I'm still glad they put them in the movie. Most of
what they added doesn't necessarily build on plot but it does add to the
characters. I don't want to give anything away because it's rather
hilarious what unfolds onscreen. The movie is filmed in an almost Ally
McBeal type of way but it remains true to the sincerity, cuteness, and
pathetic naivete that Bridget Jones embodies. There are no pretensions.
It's an entirely wonderful film. 10/10