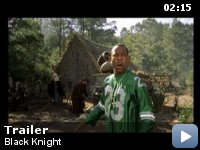 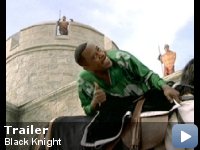 Martin Lawrence plays Jamal, an employee in Medieval World amusement park. After sustaining a blow to the head, he awakens to find himself in 14th century England.

Storyline
This is the story an amusement park employee named Jamal Walker who is magically transported back to medieval times in 14th-century England. There, Jamal meets Sir Knolte, a dissolute knight, before he stumbles into the court of the usurper King Leo. Jamal is impressed by what he thinks is the realism of the theme park; only after witnessing a gory beheading does he realize, with horror, where he really is. Jamal encounters the beautiful Victoria who is scheming to return the queen to the throne, and falls afoul of the evil Sir Percival. Joining forces with Sir Knolte and Victoria, Jamal teaches the rebels some helpful football, golfing, and boxing moves, before he dons the armor of the awesome "Black Knight"!

Taglines:
He's About To Get Medieval On You.

The scene where Princess Regina trips over her bed sheets was not scripted, Jeannette Weegar really did trip and fall, but the director liked it so it was kept and put in the final cut.

Continuity:
When Jamal is back at the lake, debating whether it's his fight or not, the medallion is tucked inside his shirt. When he turns to face the camera it's suddenly outside his shirt, and when he turns around again it's back inside.

Jamal:
That's why you shouldn't drink your own urine.

That's why you shouldn't drink your own urine.


I cannot stress the fact that this film has been overplayed and
recycled through Hollywood more times that I can count. While I have
read some reviews that claim that this is one of Lawrence's more
creative roles yet, I can only laugh and gag simultaneously at these
words. Lawrence was a major contributor to the downfall of this film.
He provided no character analysis, no development, and definitely no
humor to the entire story. It was as if we were watching a dress
rehearsal in progress before the final script arrived with all of
Lawrence's funny bits. From the quick introduction at the beginning of
the film (a mere 7 minutes of character introduction), until the
incoherent ending that was trying to monopolize on the popularity of
Gladiator, we never see Lawrence's character of "Jamal" or "Skywalker"
(depending on the care of the actors) emerge from the film. This was
merely Martin Lawrence cashing in on his already overplayed self,
stretching no further than his comfortable limits and never exerting
anything "fresh". He has fallen into the cracks of the Hollywood
recycling bin and Black Knight reinforces that idea.


Sadly, Lawrence isn't backed up with any better acting or story. Tom
Wilkinson has done some amazing films during his career, but apparently
was looking to buy a new car with this film. It required no "real"
acting from him, just sloppy drunkenness with clichéd moments near the
end that could have been pulled from any other film like this one. I
think that was my major problem with this film (beside the lackluster
Lawrence) was the story. There wasn't any. It felt like we were forced
from the beginning to all of our different places and events just to
fill time. There wasn't any redeeming value from the story. In fact, I
would go so far as to say that whomever wrote this screenplay may
have…gasp…plagiarized from nearly every other film like this one out
there. The structure was nothing new, the formula literally had dust on
it, and nobody seemed to care. Lawrence obviously didn't from the
performance that he gave, but I expected more from Mr. Wilkinson who
has impressed me in the past. This was not the best showcase for his
talent, or for anyone's talent to say the least. We must always
remember that it begins with a story, and if it doesn't sound good on
paper than it isn't going to translate well onto the screen. This is a
rule to live by for everyone involved with the Black Knight debacle.

Finally, I normally don't mention this in my reviews, but with this
film it just stood out more than any other that I have seen, but the
production of this film was horrible. The costumes, the sets, and even
the way the shots were framed seemed "cheap" in so many ways. The
costumes are the first that come to mind because Lawrence always seemed
like he was wearing something that was made with haste. How could he
have quickly made this garment in the time that he was in this land?
Who knows, but it was "cheap" and only lowered this film further into
the muck pit. If the story is going to be bad, and the actors are not
going to give their full potential by actually doing what they are paid
… to be creative … than at least give us something to look at
Production Team! Unfortunately, there was nothing ravishing to even
glance at. The entire Medieval World that Lawrence works at from the
beginning is "cheap" and obviously a set. I want a film to take me away
from Hollywood and give me my dollar's worth, not rob me blind. The
cinematography was done by a two-year old. Nothing spectacular, nothing
worth writing about.

Overall, this was a very poor film. Would it have hurt anyone working
on this project to use a little something I like to call "imagination"?
Creativity was not being used or welcomed in this film. You could tell
that the director wanted to make the film, edit out what didn't work,
finish, and relax at home while thinking of all the different ways that
he could spend his Hollywood money! I blame two major players in this
film for the overall poor quality. The first is Mr. Lawrence. If he
does not expand his acting potential and bring something new to the
screen, I don't think his Hollywood stay will be very long. The second
player that I blame for this befuddling mess is the writer. Again,
creativity and imagination went backseat to the infamous Hollywood
recycling bin. This was a truly disappointing picture.