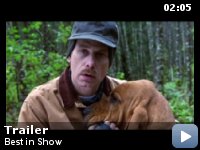 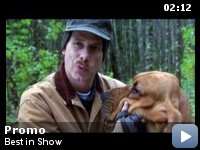 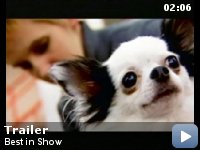 A colorful array of characters competes at a national dog show.

Storyline
The owners (and handlers) of five show dogs head for the Mayflower Kennel Club Dog Show. A film crew interviews them as they prepare for the trip, arrive at Philly's Taft Hotel, and compete. From Florida come the Flecks: she keeps running into old lovers. A wordless ancient in a wheelchair and his buxom trophy wife who may have a thing for the dog's handler own the two-time defending best in show, a poodle. From the piney woods of N.C. comes a fella who wants to be a ventriloquist. High-strung DINKs feud loudly in front of their Weimaraner. Two outré gay men from Tribeca round out the profiled owners. The dog show brings out the essence of the humans. Who will be best in show?

Taglines:
Some pets deserve a little more respect than others.

All the scenes featuring numerous dogs went remarkably smoothly. There is only one unscripted bark in the film, heard in the background as Christy and Sherri Ann argue over Christy's makeup backstage.

Errors made by characters (possibly deliberate errors by the filmmakers):
At the end of the movie there is a title that reads, "Six Months Later." However when the movie shows what happened to the Rhapsody in White characters one of them says "It's been a year."

Meg Swan:
I didn't ask for your opinion. I asked for a toy that you don't have!

You would almost have to have seen the dog show world first hand to
understand all the delicious inside jokes, but even if the extent of your
dog show experience is an occasional glimpse of the Westminster Dog Show
telecast, you'll howl with laughter.

Conformation dog showing is a world of illusion in which everyone tries to
make perfect dogs out of something less. Best in Show strips the illusion
away in a brutal satire that undoubtedly had every dog person on the planet
cringing in horror and delight. "Isn't that just like so-and-so?" and "I'm
nothing like that!"

Christopher Guest may have topped his supreme masterpiece "Spinal Tap" with
this signature mockumentary in which he skewers all of dogdom. You will
recognize Fred Willard's vapid and obnoxious television host as none other
than Joe what's his name from Westminster, and the tension between him and
Trevor Beckwith (Jim Piddock) is a thinly veiled roman a clef of David and
Joe at the Big Show.

There are a few gaffs, like the fact at all the dogs at the Show are
supposed to be champions before entry, but that doesn't detract from the
fun. John Michael Higgins, who steals the show as the uninhibited handler,
and Michael McKean are hilarious as the gay couple going out of their way
to
be outre. Co-writer Eugene Levy (American Pie) is perfect as the husband
finding out that his wife Catherine O'Hara might be Miss Congeniality of
all
time. I also loved Parker Posey and Michael Hitchcock as the overwrought
yuppie couple who project all their angst on their poor dog. Larry Miller
turns in a great cameo as one of the countless men in O'Hara's
past.

A lot of people didn't get this gem. To them I can only say Bad Dog, Bad
Dog! For the rest of us, it's Sit, Stay, and Enjoy!

TagsCanada
In the Mood for Love
The Mexican