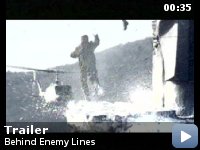 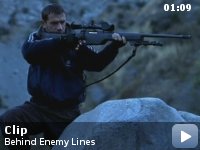 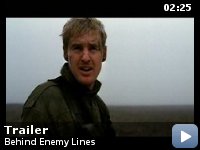 A Navy navigator is shot down over enemy territory and is ruthlessly pursued by a secret police enforcer and the opposing troops. Meanwhile his commanding officer goes against orders in an attempt to rescue him.

Storyline
Fighter navigator Chris Burnett wants out: he was looking for something more than the boring recon missions he's been flying. He finds himself flying the lone Christmas day mission over war-torn Bosnia. But when he talks pilot Stackhouse into flying slightly off-course to check out an interesting target, the two get shot down. Burnett is soon alone, trying to outrun a pursuing army, while commanding officer Reigert finds his rescue operation hamstrung by politics, forcing Burnett to run far out of his way.

Taglines:
Mission: to evade and survive

Branko Tomovic was considered for the role of Bazda.

Errors in geography:
When Burnett sits in the back of the pick-up truck you can see yellow road marking lines. In Bosnia, where the story takes place, these lines are white, not yellow.

Chris Burnett:
[to Reigart]
Sir, I signed up to be a fighter pilot. I didn't want to be a cop. And I certainly didn't want to go walking a beat on a neighborhood nobody cares about.

A superb and touching action film…

These are my first comments here on Imdb, although I've rated dozens of
films. I usually don't do this, since I think there are much more
competent
people out there than myself. This is a rare exception, since this
particular film depicts events which recently took place in my country and
some neighboring ones. Furthermore, the majority of the cast is from
several
Slavic countries, mine included (Croatia).


All in all I liked the film very much. I gave it 8/10. The action
sequences
and visual effects are superb. The American cast is average, but good.
However, it's the other cast that really excels. The 2 factions in the
war-torn Bosnia are depicted superbly. Especially the "bad guys". To be
able
to appreciate this to the full extent, unfortunately, you'd have to live
here for some time and get to know the mentality of the Balkan peoples.
I've
seen the DVD edition, which is excellent in itself and remember a
director's
commentary on their choice of cast. He said that they chose Slavic actors
because they would never get the same character expression with American
ones. That is perfectly true. Not because ones are better in acting than
the
others, but it's the question of the underlining mentality. It's very
difficult for people brought up in countries which have known democratic
societies for many generations to imagine how it is to be surrounded by
such
atrocities in a relatively small geographic area and all happening at the
turn of the millennium. The mixture is very strange and produces some
bizarre situations, saturated with dark humor. Like the scene where the
American pilot asks Bosnian teenagers for some water, and they give him
Coke
instead. Or where children routinely cross over anti-personnel mines.
Similar situations really did occur many times in such a surrounding.

My point is that the film does get superficial and even shallow sometimes,
but in all the director and the crew did a terrific job seen from the
point
of view I'd just explained. Even the character lines (in perfect local
dialect) are so real that my wife and I forgot it's an American film when
we
watched it… Indeed a rare combination of great action sequences and
touching scenes in a local warfare.