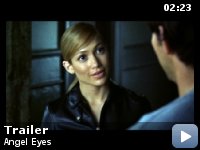 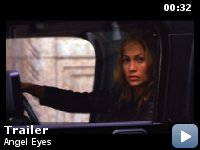 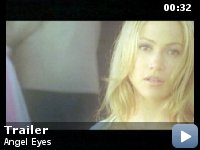 A mysterious man is drawn to a feisty female police officer and a unusual relationship ensues, as not everything is as it seems.

Storyline
While pursuing a suspect one night, Chicago Police officer Sharon Pogue nearly becomes the victim of a fatal ambush. A mysterious stranger, Catch intervenes, disarms the assassin and saves Sharon's life. Is it a stroke of luck? A twist of fate? Or just a concerned citizen who happened to pass by at the right time and wasn't afraid to get involved? Maybe, But Sharon and Catch have met once before. As the two fall in love, they discover the truth about each other and are forced to deal with the secrets from their past.

Taglines:
The Deeper You Look. The More You Will Find.

Jennifer Lopez insisted that the part of Catch be played by Jim Caviezel even though she didn't even know his name. She had recently been impressed with his performance in
The Thin Red Line.

Errors in geography:
When Sharon walks up to the parents' house and meets Kathy, a speed limit sign in the background says "Maximum 40". That would mean 40 kph in a residential area in Canada. In a residential area of Chicago, the sign would read: "Speed Limit 25" for 25 mph.

[Catch has brought Elanora her groceries]

Catch:
I brought you nectarines cause the peaches were hard as rocks


If you're a hard core movie fan, you learn to appreciate good "Bad
Movies." There are movies that go so far off the tracks in terms of one
or several essential features of film art — casting, script, sets,
pacing, editing, lighting, coherence — that there is no way that you
could, being honest, recommend them without qualifications to an
unsuspecting viewer.


Movies that go off the tracks in these essentials and offer no
redeeming features are just plain Bad Movies. You you make fun of them,
and then you forget about them.

But some Bad Movies offer, amidst the badness, unique moments of grace
and truth. You allow yourself to be sucked in, and you studiously
ignore or forgive all the screw-ups that went into making them "Bad
Movies." "Angel Eyes" is a *Good* Bad Movie.

Why Bad? Genre incoherence is the biggest problem here. "Angel Eyes"
was marketed as a supernatural thriller that offered spooky, scary
insights into fate, love, danger, and perhaps life after death. Ads,
and the first portion of the movie, hinted at a weird alternate
identity for one character. Was he a ghost? An angel? A devil? Would
"Angel Eyes" be another "Sixth Sense" or "Wings of Desire"? That's all
just smokescreen. I'm not revealing any spoilers by saying that no one
in the movie is a ghost, an angel, or a devil; that conceit from the
ads is jettisoned pretty quickly.

There is a subtext of fate, destiny, love and death, but that isn't
worked really hard, either. That whole subtext could have been skipped
and you'd still have pretty much the same movie.

The movie you get is a movie about traumatized people finding love and
rebirth. And that is one great theme.

Another problem with the movie is its misunderstanding of how quickly
people can recover from trauma. But, hey.

I say "but, hey," because this movie has a lot going for it, and it's
worth seeing for what it has going for it.

Jim Caviezel is an underrated actor. He's not wooden; he's subtle. It's
tragic that we've gotten to an era where audience's eyes can't
appreciate a quiet actor in the Gary Cooper mode.

Caviezel is a worthy inheritor of the Gary Cooper mantle. He's
stunningly handsome, has a big, gorgeous body — he's a former
basketball player, and it shows — and he possesses Cooper's quiet
masculine tenderness and humility.

All these qualities have allowed him to strike the perfect note of a
very male spirituality in a number of films, from "Frequency" to "Thin
Red Line" to "Pay It Forward" to "The Passion" to "Angel Eyes." In his
early scenes, when the movie doesn't want you to know quite what he's
about, he is perfect as a perhaps ghost-angel-devil-weirdo homeless
bum-savior.

He plays a wounded man, and Caviezel has the gifts to convey his
character's inner pain. You believe that he cares as much as he does
about what wounded him; you believe that his wounds could have done to
him what the movie wants you to believe they did to him.

And you know what? She's a fine actress. Don't let her non-silver-spoon
pedigree keep you from appreciating what she can do on screen.

Lopez is as good as a cop here as she was in the more celebrated film,
"Out of Sight." She's winning, charismatic, natural, and lovely to look
at. Even in a white t-shirt and navy blue cop uniform slacks, she is
beautiful.

Like Caviezel, Lopez plays a wounded character ready to be reborn by
love. She's equally as good as he, but she conveys her different wounds
in a different way. One wounded person retreats; another lashes out in
violence. It's interesting to see which party picks which method.

Victor Argo, in a very small part as a very flawed man, is JUST
PERFECT. 100% believable and heart-wrenching. I'll never forget his
moments locked in silent misery, a misery he causes and a misery he
feels.

Finally, there is a not-to-be-missed scene between an abused family
member and the abuser. A character speaks into a video camera at a
family reunion and … the scene just took my breath away. At that
point I wanted to cry and surrender my full respect to the movie, in
spite of everything it had done wrong so far.