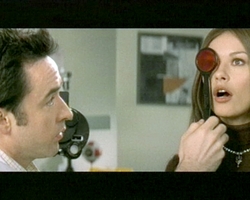 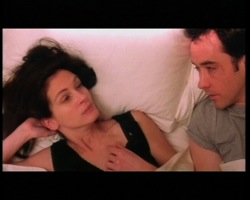 A movie publicist deals with the messy public split of his movie's co-stars while keeping reporters at bay while a reclusive director holds the film's print hostage.

Storyline
In the midst of a nasty public breakup of married movie stars, a studio publicist scrambles to put a cap on the escalating situation as the couple's latest film has found it's only print kidnapped by the director.

When Hal is talking to the press at the press junket his microphone shorts. As he says the line "…this is the most honest movie I have ever made" after the word "made" you hear a click and can see the flash in the microphone headpiece as it shorts.

Continuity:
While standing behind the cameras at
Larry King Live, Kiki has a fairly large pimple on her forehead. Right after the show, she's in the hallway talking to Gwen and it's completely gone.

Narrator:
America first fell in love with Eddie Thomas and Gwen Harrison in the box office smash "Autumn With Greg And Peg". They had the most celebrated marriage in Hollywood. Who could forget how they hit one out of the park in "Requiem for an Outfielder"?

This is not a biting Hollywood satire, and I'm sure there were some missed
opportunities to poke fun at the biz. But as long as that's not what
you're
expecting, you should have lots of fun.

I'm an avid Billy Crystal fan, and though he's not the star of the film, I
was really looking forward to this movie–being that he also co-wrote the
script. There are some trademark zingers you'd anticipate from the
Oscar's
favorite MC: "Sixty pounds? That's a Backstreet Boy."

The cast is superb. Hank Azaria, like always, steals the show. He is
absolutely hilarious as Catherine Zeta-Jones' new Spanish lover. There is
a
great scene near the end where he gets outraged at a rumor of his
inadequate
"size." Just like his role as the flamboyant butler in "The Birdcage" he
brings out tons of laughs, taking on a phony accent. He really is a man
of
extraordinary talent. John Cusack shows us his more…goofy side. I've
always enjoyed him in past movies, but he usually plays the straight man.
This was something different. Well, I guess you can say he plays the
straight man, but he stumbles into all sorts of slapstick situations that
causes him to overreact in comic fashions. And he's great at it! Julia
Roberts is…well…Julia Roberts. I have nothing against Julia, but I
don't patronize her in the same way others do. I don't think she's the
most
beautiful woman and I don't think she's the most brilliant actress. But
I'm
sure many were looking forward to this movie because of Julia, and if
you're
one of those people, you won't be disappointed. Catherine Zeta-Jones is
extremely beautiful, but she is so great as the whiny, bitchy ex-wife of
Cusack/spoiled actress that I wanted to stab her every moment she was on
screen. Alan Arkin is funny as the pretentious, preposterous spiritual
healer. There is a great deleted scene with him and Cusack over the
phone,
while Arkin rides the streets of Vegas in a pink convertible. Those
renting
the DVD–don't skip the deleted scenes! And last but not least,
Christopher
Walken (Da Man!) has a brief but memorable appearance as reclusive
director
Hal Wideman.

Don't expect any surprises. The story's as predictable as can be. The
whole movie is superficial fluff. But it's enjoyable superficial fluff.
If
you just want to kick back, have some good laughs, without having to kill
any brain cells–curl up on the couch with your man or woman and watch
"America's Sweethearts."