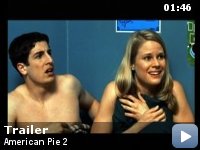 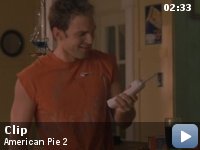 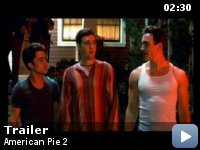 The continuing bawdy adventures of a group of friends reuniting after their first year of college.

Storyline
The whole gang are back and as close as ever. They decide to get even closer by spending the summer together at a beach house. They decide to hold the biggest party ever to be seen, even if the preparation doesn't always go to plan. Especially when Stifler, Finch and Jim become more close to each other than they ever want to be and when Jim mistakes super glue for lubricant.

Taglines:
It's time for a second helping.

Cameo:
[Adam Herz]
in the scene with Kevin's brother (Casey Affleck) in the hallway as the two businessman talking to his right.

Jessica:
If a guy tells you how many girls he's hooked up with, it's not even close to that. You take that number and divide it by three, then you get the real total. OK, so if Kevin is saying it's been three girls it's more like one or none.

Jessica:
The rule of three. It's an exact science. Consistent as gravity.

Why does everyone hate this so much?


I'll be first to admit that I hate teen comedies in general and
typically frown upon most of them – I didn't even like "There's
Something About Mary" too much, although I'm not sure it's really a
"teen" film.

I own all three "American Pie" films on DVD because they are one of the
few teen series whose characters seem real and you actually feel
empathy for. They're not awkward characterizations of real people
without emotions – the movie takes time setting up their personalities,
quirks, etc., and then places them in embarrassing situations. For
example, the movie "Swingers." That telephone call Favreau makes is a
painful experience for the viewer. Would it have been so painful if we
hadn't gotten to know him throughout the movie? "American Pie" is kinda
like that. It works well because of the characters. It's crude, yes.
It's crass, very. It's sexist, maybe. But that's how guys are. It
doesn't exploit these elements as many teen sex comedies do – some are
moderately entertaining (like the Johnny Depp film "Private Resort")
but unbelievable and basically just lots of skin. "American Pie" is
better, one of the best of its genre.

Everyone seems to hate the first sequel, which was released in 2001, a
couple years after the original. Jim (Biggs) returns from college and
hangs out for the summer at a beach house with his best pals. But with
Stiffler (Seann William Scott) there, it's not too easy because they
soon end up in more embarrassing situations.

This movie is very similar to the original and normally I have a
problem with this. Basically all the scenes are "updates" on scenes
that existed in the original. E.g. the lesbian strip over the
walkie-talkies, the incident with the glue, the whole thing with
Stiffler's mom and Finch.

Nevertheless it is effective, entertaining and funny. The characters
are given more room to develop and believe it or not, I think I like
this better than the first film. (The third is probably my favorite, if
only for the focus on Stiffler and the introduction of Fred Willard,
one of the great character actors of our time.) "American Pie 2" is
somewhat recycled and some people may find it one of those "pointless"
sequels, but I liked it, and this is coming from a guy who typically
loathes these films – so considering I'm giving this seven stars, that
says quite a lot. Either I'm out of my mind or there's something about
these films that's just more accessible and likable than others in
their genre.