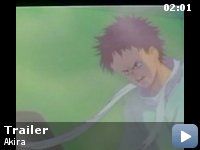 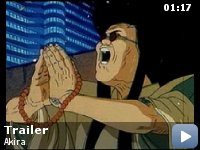 A secret military project endangers Neo-Tokyo when it turns a biker gang member into a rampaging psionic psychopath that only two kids and a group of psionics can stop.

Storyline
Kaneda is a bike gang leader whose close friend Tetsuo gets involved in a government secret project known as Akira. On his way to save Tetsuo, Kaneda runs into a group of anti-government activists, greedy politicians, irresponsible scientists and a powerful military leader. The confrontation sparks off Tetsuo's supernatural power leading to bloody death, a coup attempt and the final battle in Tokyo Olympiad where Akira's secrets were buried 30 years ago.

Taglines:
The end of the world was only the beginning

The movie consists of 2,212 shots and 160,000 single pictures, 2-3 times more than usual, using 327 different colors (another record in animation film), 50 of which were exclusively created for the film. The reason for this statistic is that most of the movie takes place at night, a setting that is traditionally avoided by animators because of the increased color requirements.

Continuity:
When Kaneda shoots Tetsuo the laser makes a hole in Tetsuo's shirt, later the hole is gone.


'Akira' is an astonishingly influential film, easily as much so as
cinema's touchstones Citizen Kane and Pulp Fiction. Its impact is made
more difficult to judge, though, given that it was made more than
sixteen years ago, and didn't make an initial impact outside of Japan.
Oddly, this made its influence even more profound, benefiting from
'word of mouth' and the influx of cheap VHS at the end of the Eighties.
It's also gained enough of a following to warrant being digitally
remastered, at a cost of over US$1 million, as a 'Special Edition,'
which I am basing these comments on.


Rather than suffering the humiliation of being advertised, Akira
filtered, like a software virus, into the bedrooms of what would become
Generation X. Hollywood began to sit up and pay attention after teens
began abandoning the pap of the day like Last Action Hero, and started
seeking out something different, dissident, and Akira finally had its
audience. Japanese animation now has a firm presence in our media, and
so many paths lead back to the cultural genesis of Akira. Finally, its
role in the history of film was cemented with the release of last
year's mega-hit, the Wachowski brothers' The Matrix. Without Akira,
there is no Matrix, and with no Matrix, you have to wonder how very
different Western cinema would be today.

So what is Akira? It's a Japanese animated film, an adaptation of 2,000
pages worth of graphic novel by Katsuhiro Otomo and set in the
futuristic world of Neo-Tokyo. Rebuilt from the ashes of World War 3,
it's a technological dream of neon, computers and soaring science,
mated to the social nightmare of corrupt politicians, a rampant
military and an oppressed working class. Add to this the rise of a
powerful breed of psychics (or 'psionics') capable of various degrees
of telepathy and telekinesis, and somehow linked to a top secret
military project known as Akira, and Neo-Tokyo seems ready to explode.
You can almost feel the heat, the sweat, and the grime, courtesy of the
borderline-masochistic attention to detail in every frame of every
scene of animation.

Akira is all about hyper-reality, which later became known as bullet
time. Animation, and more importantly imagination, allows impossibly
kinetic and 'free' camera movement. The style rams home every car
crash, explosion and death defying stunt. It's not the easiest film to
watch in one sitting, nor indeed, at all, but you'll come away knowing
where the inspiration behind so many late Nineties blockbusters came
from. More importantly, you'll appreciate how mediums come to influence
other mediums, and barriers such as language and culture can be hurdled
with ease.

It's not just an action-fest either. The main arc of the story is that
of Tetsuo, who begins developing psychic powers but doesn't understand
what is happening to him or the responsibilities that come with such
godlike power. This opens the door to some genuinely moving scenes of
film-making endeavour and artistic triumph, as Tetsuo wonders if he is
losing his mind and eventually lashes out against anyone and everyone.
The standout scene in the whole film, for me, should be mentioned about
here. Whilst under observation in a hospital bed, Tetsuo hallucinates
being attacked by childhood toys. Dreams and reality are folded into
each other and so it remains for much of the rest of the film. Horizons
peel away and reality itself seems to disintegrate, fragment after
animated fragment, as Tetsuo battles his way to downtown Neo-Tokyo and
prepares to face Akira, whatever that may mean.

The only other character developed to this level is his best friend
Kaneda, who in a number of small, well-judged scenes, comes across as
bright, breezy, confident and heroic, and on hand to reason with
Tetsuo. No matter what point Tetsuo's powers escalate to, and no matter
how much he is wanted by the police and the military, Kaneda just wants
his old friend back, and it is this hope of redemption which gives the
film its emotional backbone.

Other strengths include the intelligent use of sound. A minimum of
scoring is used: mostly Japanese drums and percussion, and some voices
during dramatic parts. More interesting is the use of silence, absolute
flat silence, during key moments. It fits in very well with the themes
of psychic/telepathic powers, and in a more general way, the vivid
hyper-reality of the film's delivery. Put it this way – when you dream,
you dream in a silence of implied words, and Akira knows this too.

I thought the dialogue was excellent too. The street kids have catchy
and sardonic street lingo ("Tetsuo's our friend! If anyone's going to
kill him, it should be us!") The military are represented by a titanic
general whose lines have gained a certain amount of hilarity during
translation ("You hedonistic fools! Can't you see it is utterly
pointless to fight each other!") I found myself eagerly awaiting the
next punchy exchange between players, which is something that Hollywood
has been missing recently. In seven out of ten films I see, the
dialogue is truly awful. How difficult can it be to get two people to
talk naturally?

'Akira' is not for everyone. In the first twenty minutes we have strong
language, an attempted rape and the kinetic carnage of a fight between
rival biker gangs. Some will simply not tolerate this in an animated
movie which is, despite all efforts, going to be viewed by younger
children. Even if you can stomach the unsavoury content, you might be
beaten by the sheer oddness of Japanese culture. (They certainly have
an unhealthy obsession with seeing Tokyo laid to waste.) But if you can
skip over these points and see the overall genius of Akira, you may
just appreciate Akira's place on the pantheon of modern culture.

TagsJapan Tokyo US VHS
America's Sweethearts
Planet of the Apes