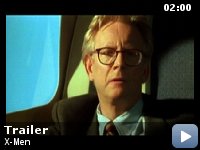 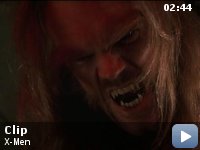 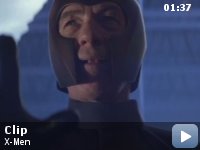 Two mutants come to a private academy for their kind whose resident superhero team must oppose a terrorist organization with similar powers.

Storyline
In a world where both Mutants and Humans fear each other, Marie D'Ancanto, better known as Rogue, runs away from home and hitches a ride with another mutant, known as Logan, a.k.a. Wolverine. Charles Xavier, who owns a school for young mutants, sends Storm and Cyclops to bring them back before it is too late. Magneto, who believes a war is approaching, has an evil plan in mind, and needs young Rogue to help him.

Taglines:
Protecting those who fear them.

After the film was completed, the wheelchair that the character Professor Xavier used was sold in an auction to Patrick Stewart's attorney, and then rented back by the production company for
X2.

Continuity:
During the fight atop the Statue of Liberty, Sabretooth throws Wolverine away from the statue's crown. In the next shot, their positions are reversed, with Wolverine's back to the crown.

Prof. Charles Francis Xavier:
[narration]
Mutation: it is the key to our evolution. It has enabled us to evolve from a single-celled organism into the dominant species on the planet. This process is slow, and normally taking thousands and thousands of years. But every few hundred millennia, evolution leaps forward.

"X-Men" is a rare treat– a blockbuster that lives up to its hype and a
comic book adaptation that hits the mark.

Along with Tim Burton's "Batman", this stands head and shoulders above all
other superhero movies. It's a genre that's usually synonymous with
silly,
campy, cartoonish crap, but Bryan Singer delivers a long-awaited exception
to the rule. "X-Men" is smart, stylish, and very cool… one of the
better
sci fi/fantasy films of the last decade.

Of course, it helps to have good source material.

The X-Men comics, which originated in the 1960s, are more politically
progressive and morally complex than older superhero stories such as
"Superman" where the heroes are always right, and truth, justice, and the
American Way always prevail. The series is a well-crafted parable about
individuality and discrimination. The characters are mutants–struggling
to
find a place in a society that rejects them. Its primary villain,
Magneto,
isn't an evil lunatic– he's a sympathetic character, a misguided
revolutionary playing Huey Newton to Professor Xavier's Martin Luther
King.
The iconic character, Wolverine, is a beer-swilling anti-hero who cares
little for ideals and fights only to protect himself and his loved ones.
The female characters are as powerful and important as the men, rather
than
being mere love interests.

Rather than making just another flashy
explosion-per-minute-special-effects-extravaganza,
Singer practices the lost arts of character and plot development. As a
result, the movie has a far greater depth than the average big budget
summer
flick. The acting is also quite good on the whole. Hugh Jackman, who
plays
Wolverine, is fantastic–a bona fide Clint Eastwood caliber badass. Some
of
the dialogue is fairly cheesy, but in the hands of Ian McKellan and
Patrick
Stewart it sounds quite convincing. (Stewart has made a career out of
making lame dialogue sound cool.)

Hard-core fans of the comics have complained about the omission of several
popular X-Men. This is silly. A movie that gave the background on every
character in the comic books would be 6 hours long. There will be plenty
of
time to develop new characters in the forthcoming sequels. Fans have also
complained about the casting of Anna Paquin as Rogue. I disagree. Rogue
is unable to touch another human being without harming them–she would not
realistically act like a confident, sassy warrior. Paquin did a
tremendous
job of conveying the fear and isolation that such a young woman would
feel.
She will undoubtedly grow into the part in future movies.

In the end, "X-Men" is a comic book movie. Superpowers are explained with
silly pseudoscientific babble, the plot revolves around a fairly
ridiculous
take-over-the-world scheme, and names like "Magneto" are spoken with a
straight face. Don't read all the glowing reviews and expect Citizen
Kane.
But don't underestimate "X-Men" either. It is an intelligent movie that
people will enjoy whether or not they are familiar with the
comic.