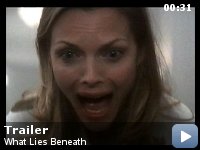 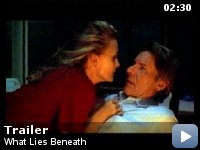 The wife of a university research scientist believes that her lakeside Vermont home is haunted by a ghost – or that she's losing her mind.

Storyline
Norman Spencer, a university research scientist, is growing more and more concerned about his wife, Claire, a retired concert cellist who a year ago was involved in a serious auto accident, and who has just sent off her daughter Caitlin (Norman's stepdaughter) to college. Now, Claire reports hearing voices and witnessing eerie occurrences in and around their lakeside Vermont home, including seeing the face of a young woman reflected in water. An increasingly frightened Claire thinks the phenomena have something to do with the couple living next door, especially since the wife has disappeared without apparent explanation. At her husband's urging, Claire starts to see a therapist; she tells him she thinks the house is being haunted by a ghost. His advice? Try to make contact. Enlisting the help of her best friend, Jody, and a ouija board, Claire seeks to find out the truth of What Lies Beneath.

Taglines:
He was the perfect husband until his one mistake followed them home.

Robert Zemeckis consciously shot
What Lies Beneath in the style of Hitchcock, if he had access to digital technology. Also, the heroine of the film is a blonde, which was a common trademark of Alfred Hitchcock's.

Continuity:
Claire first sees the ghost when she reaches out to pull the plug from the bathtub. Then she screams and Norman runs in. She hugs him, and you can see her hand on the back of his robes. Her hand isn't wet, and his shirt doesn't get wet.

Claire Spencer:
Come on. I'll make you some waffles.

Scary, spooky, in a way that reminds me of days gone by.

Oh man!! What a fun movie! Without giving too much away, it's a ghost movie.
The plot wasn't anything to write home about, it's been done about 100 times
before, but it was just done better than it has been in recent memory. Seems
that movies try to over-do everything lately with special effects, gore,
music and violence. Not here… I kept thinking that they had taken a step
back and returned to what makes movies spooky. It's not a computer generated
demon, or a high intensity soundtrack; it's a creaky door, it's a reflection
in the glass, it's that feeling when you know you just pushed that chair in
a minute ago and now it's away from the table again. That's what makes
people uneasy, that's what makes them check their closets and sleep with the
hall light on when they go home.


The most notable difference in the movie was the silence. I'd guess that
about 50% of the movie was completely silent except for breathing,
footsteps, creaking doors… wonderful. Seems that lately the powers-that-be
just have to fit every second of the soundtrack into the movie (seems they
should since now-a-days there's commercials for the soundtrack separate from
the movie in many cases) in order to boost the spooky level… it rarely
works. The silence in the movie just added to that tension in your shoulders
and made you slowly edge up on your seat.

If I had to pick anything to complain about, it'd be the weak foreshadowing
of two events, I don't want to give anything away, but you'll know when you
see it. It's like they gave up on trying to write them into the plot. They
may as well have put a subtitle on the screen (or a "Pop Up Video" bubble)
that told you that what they were saying was important. For my wife and I,
it gave a bit away about how the movie was likely to end.

Michelle Pfeiffer was really good, I'd guess she was in almost every single
shot in the film, so anything but a great performance would have shown. I'm
not normally one to judge actors performances, but there's some credit to be
given to someone who can act that scared using only her eyes. I wouldn't be
surprised if she gets a nod at the academy for this one.