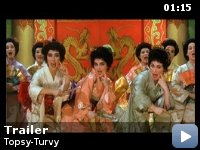 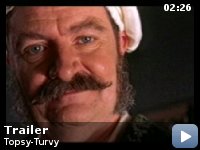 After Gilbert and Sullivan's latest play is critically panned, the frustrated team threatens to disband until it is inspired to write the masterpiece "The Mikado."

Storyline
After their production "Princess Ida" meets with less-than-stunning reviews, the relationship between Gilbert and Sullivan is strained to breaking. Their friends and associates attempt to get the two to work together again, which opens the way to "The Mikado," one of the duo's greatest successes.

Taglines:
The egos. The battles. The words. The music. The women. The scandals.

W.S. Gilbert's quip about a prostitute dying of consumption in a garret refers to Verdi's opera "La Traviata."

Errors made by characters (possibly deliberate errors by the filmmakers):
During the performance, Katisha's kimono is wrapped incorrectly. All Kimono wrap from the right side of the body to the left (i.e. the right side folds over the left), but her kimono wraps from left to right. Every other character has her/his kimono wrapped correctly.

Gilbert's Father:
A father should not have to seek permission to visit his own son!

Gilbert:
The son shouldn't be expected to be clairvoyant.

Mike Leigh's gloriously entertaining film, `Topsy-Turvy,' offers a wise
and
witty slice of musical theater history. Set in 1880's London, the movie
chronicles the extraordinary personal and professional relationship
between
two giants of the 19th Century entertainment world, lyricist `Willie'
Gilbert and composer Arthur Sullivan. The screenplay, wisely, chooses to
pick up the tale not at the very beginning of their collaborative career –
tracing its rise and fall as many biopics would do – but rather at the
point
where the team has already garnered international fame and success but
seems
of late to be experiencing a bit of creative stagnation. Sullivan, tiring
of the seemingly trivial nature of the librettos they've been producing,
wants to break away and embark on his own to produce a work of more
`weighty' merit. Gilbert, on the other hand, delights in his success and,
although bothered by comments in the press that his work has begun to
repeat
itself, initially resists Sullivan's plea that they abandon their hitherto
winning formula.


Thus, the conflict between the two men of creative genius plays itself out
against the fascinating backdrop of a deliciously recreated vision of the
theatrical world of a hundred-odd years ago. Just as important to the
film
as the two main characters is the rich assortment of secondary players –
theater proprietors, company actors, wives, lovers and parents – who swirl
around the principals and provide a colorful tapestry to match the
exquisite
art direction and costuming that adorn the film. In addition, Leigh
incorporates clever references to some of the technological marvels just
making their appearance at the time: telephones, reservoir pens and luxury
hotels with baths for every room!

Leigh's pacing is admirably unhurried and relaxed. So rich is the detail
of
his vision that fully thirty-five minutes elapse before the two lead
characters even have their first scene together. In addition, the
inspiration for `The Mikado' – ostensibly the centerpiece of the film's
plot
– doesn't strike Gilbert until well into the second hour. Yet, the film
never falters in interest, least of all when Leigh devotes long stretches
of
footage to showing us the actors rehearsing their parts or having us
eavesdrop on some behind-the-scenes salary negotiations or discussions of
artistic differences. This is the real triumph of the film: Leigh opens
up
a world to us by letting us see the fascinating nuts-and-bolts aspects of
the creative process to which we, as members of a theatre audience, are
rarely privy. He also is not afraid to linger long over many a beautiful
reproduction of the musical pieces themselves. Leigh can count his film a
success in that it makes us want to rush out and catch a performance of
one
of these operettas ourselves.

The film would not be the splendid success it is were it not for the
dazzling performances of its amazingly large cast. Jim Broadbent and
Allan
Corduner are perfection as the good-natured but often antagonistic
partners,
never playing the humor too broadly or violating the spirit of elite
British
gentility even in their most conflict-laden moments.

Indeed, it is this very quality of quiet subtlety that permeates every
aspect of `Topsy-Turvy' and that makes it the wholly satisfying and
entertaining film it is.