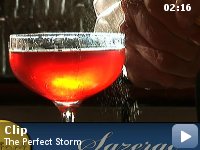 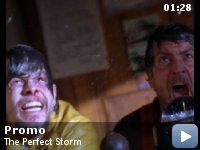 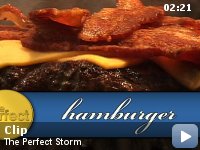 An unusually intense storm pattern catches some commercial fishermen unaware and puts them in mortal danger.

Storyline
In October 1991, a confluence of weather conditions combined to form a killer storm in the North Atlantic. Caught in the storm was the sword-fishing boat Andrea Gail. Magnificent foreshadowing and anticipation fill this true-life drama while minute details of the fishing boats, their gear and the weather are juxtaposed with the sea adventure.

Towards the end of Mary Elizabeth Mastrantonio's emotional speech in the church at Gloucester, her microphone picked up her pounding heartbeat. Director Wolfgang Petersen liked the effect, so it remains audible on the soundtrack.

Incorrectly regarded as goofs:
Seagulls are visible while the Andrea Gail is fishing at the Flemish Caps. Seagulls are found far at sea in the Atlantic; they can live on and between ships in the area.

[the Andrea Gail is climbing a gigantic wave]


Yes I know. I've heard all the complaints already. "That's not how it
happened" (as if anybody really knows); "All of those events could not
have co-occurred on the same boat in the same trip" (as if anybody
really knows); etc. etc. Well, here's my answer – it's a movie, just a
movie. Don't see a movie to learn about "what really happened" unless
the film states very clearly that it is a documentary. Films are, like
good books, supposed to tell you something true about people, about
things that happen, and about life. They're not (even when they're
placed in the documentary shoebox) necessarily about what really
happened and how.


The Perfect Storm is a heavily fictionalized speculation concerning the
experience of the Andrea Gayle and its crew during the 'storm of the
century' in the early nineties. George Clooney and Mark Wahlberg head a
fine, under-appreciated cast, as regular yankee fishermen, their
friends, and family, living in the Massachussetts town of Gloucester
(pronounced "Glosta" for those of you from away). Billy Tyne (Clooney)
is a once legendary long-line (swordfish) captain who is down on his
luck and needs a big catch to bring himself back into the fold. He and
his crew set out to find that catch on exactly the wrong day, in
exactly the wrong place. The second half of the film is their attempt
to get home, and also incorporates Coast Guard rescue action scattered
all around the Atlantic during the massive storm.

Having lived in Maine for years, and having gotten myself thoroughly
immersed in the ballads of Ruth Moore and the amazing New England
Maritime culture, I have to admit that I was predisposed to like this
film, despite all of the issues my fellow reviewers have harped on. And
no, I haven't read the book, nor do I intend to. Still, in an attempt
to be somewhat objective, I gave it an 8 and I'll give it an above
average recommendation, but I will also say that my inclination was to
give it an 9 or a 10.

This film mixes New England fishery and sailor lore, a few scattered
facts about the Andrea Gayle Story, and a lot of dramatic license, to
tell a story about the heroism of the average American and their
families. It is also an homage to the the New England fishing industry
and its traditions. Though it is easy to mistake the real life heroes
(the Coast Guard operatives who saved so many lives during that storm)
for the heroes of the film, the crew of the Andrea Gayle and their
loved ones are the real heroes here – in their valiant efforts to save
themselves, their boat, and their catch.

The performances and the script are strong and the characters very well
realized (though fictionalized). Wahlberg and Clooney are great.
Clooney gives the best performance I have seen him give. Some of the
smaller parts deserve special mention – Mary Elizabeth Mastrantonio,
Michael Ironside, Diane Lane and John C. Reilly are always very good
(or better), but I was unexpectedly charmed by John Hawkes, William
Fichtner and Janet Wright.

It is impossible to discuss this film without talking about the amazing
special effects. To summarize, the first time I saw The Perfect Storm,
I actually had difficulty sleeping because I felt the bed rocking to
the rhythm of imaginary waves each time my eyes closed. Had I seen it
in a theater, I am convinced that I would have considered popping a
dramamine. Although at times exaggerated, this is the best film
re-creation of sea storms I have ever seen. Every scene is thoroughly
believable and marvelously detailed, even down to the weird patchiness
of an incoming torrent often called "the calm before the storm".

Obviously, I liked this film. And I will give it a strong
recommendation with a couple of caveats. First – if you're not somebody
who appreciates New England culture and understands something of the
kind of humble heroism "Glosta Men" (and women) are expected to have,
you might not get it completely. Second – if you come to this looking
for a story that rings true in the sense of objective history, you have
come to the wrong place. Otherwise, sit back with some popcorn and
somebody you love, and enjoy the ride.