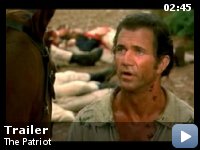 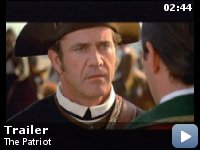 Peaceful farmer Benjamin Martin is driven to lead the Colonial Militia during the American Revolution when a sadistic British officer murders his son.

Storyline
It is 1776 in colonial South Carolina. Benjamin Martin, a French-Indian war hero who is haunted by his past, now wants nothing more then to live peacefully on his small plantation, and wants no part of a war with the most powerful nation in the world, Great Britain. Meanwhile, his two eldest sons, Gabriel and Thomas, can't wait to enlist in the newly formed "Continental Army." When South Carolina decides to join the rebellion against England, Gabriel immediately signs up to fight…without his father's permission. But when Colonel William Tavington, British dragoon, infamous for his brutal tactics, comes and burns the Martin Plantation to the ground, tragedy strikes. Benjamin quickly finds himself torn between protecting his family, and seeking revenge along with being a part of the birth of new, young, and ambitious nation.

Taglines:
Some things are worth fighting for.

Incorrectly regarded as goofs:
In the town hall meeting in the beginning, Col. Burwell said, "We killed 700 of them at Bunker Hill and they just kept coming". Actually they killed 226, but the results were constantly exaggerated in the retelling.

Benjamin Martin:
I have long feared that my sins would return to visit me, and the cost is more than I can bear.

The Patriot is technically a good movie. Nicely made with good
characters,
good acting, a strong storyline and fabulous cinematography.

But, to say this movie distorts history would be an understatement. And
that is extremely sad in a movie that sells itself as an accurate
portrayal
of events during the revolution. The Patriot, unfortunately, crosses the
line and try's to portray as 'actual fact' a film which is predominantly
fictional. Hence, the 'real life' equivalent of Benjamin Martin actually
used to scalp Native Americans in his spare time (a fact neatly overlooked
by the director).

This 'rose tinted' view of history is at its worst during the
church-burning
scene where a British Army officer ordered the murder of many innocent
civilians by locking them in a church and setting it alight. This event
never took place and yet, thanks to The Patriot, a whole generation of
Americans will believe that the British Army actually committed this
horrendous act in South Carolina — when in fact history shows that it was
not the British Army that burned a church full of people in 1776 but the
Nazis that did during WW2.

As a Brit, I don't so much mind Hollywood always portraying us as the 'bad
guys' — after all it is American money making these films — I'm more
concerned that some Americans actually believe what they watch. This is
especially true in movies like The Patriot which 'pretend' to be real.

It's a shame that in such a technically competent movie, which pays such
attention to minutiae detail like the costumes, that something as
significant as the accuracy of the screenplay could have been so
grotesquely
overlooked.

TagsEngland USA
Me, Myself & Irene
The Perfect Storm