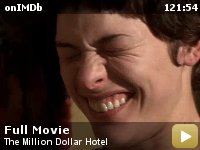 Tragi-comic, romantic whodunnit set in a run down hotel which plays host to mentally ill people too poor to afford medical insurance.

Storyline
The movie starts when a billionaire's son dies in a skid row hotel and a federal agent turns the lives of the miscreant residents upside down to find out if it was suicide or murder.

Taglines:
Everyone has something to hide.

The film's story was conceived by and the film produced by Bono, the lead singer of U2. (U2 have contributed songs to all Wim Wenders' films since _Until the End of the World (1991)_). The band makes a brief cameo appearance in the hotel's lobby. The hotel is an actual hotel in L.A. and Bono was inspired to come up with the idea for the film after the group shot the video for the song "Where the Streets Have No Name" there in the mid-1980s. In the video the band gave a live performance on the roof from where Tom-Tom jumps.

Continuity:
The positions of the pool balls change during the voting scene.

Tom Tom:
Wow, after I jumped it occurred to me, life is perfect, life is the best. It's full of magic, beauty, opportunity, and television, and surprises, lots of surprises, yeah. And then there's that stuff that everybody longs for, but they only real feel when it's gone. All that just kinda hit me. I guess you don't really see it all clearly when you're – ya know – alive.

Beautiful film– but definitely not for everyone

a) Enjoy Jerry Bruckheimer and Michael Bay collaborations b) Thirst
insatiably for explosions, car chases and sex scenes featuring
silicone-enhanced blondes c) Are considering this film only because
you're a Mel Gibson fan…

THEN DON'T RENT "THE MILLION DOLLAR HOTEL"! YOU WILL LIKELY HATE IT!

Otherwise, you might want to give this one a shot. MDH is far, far off
the beaten Hollywood path. It's a quiet, understated film that finds
beauty and grace in very unlikely places. Bono and Wim Wenders have put
together a love story so unconventional that it nearly defies
description… it is certainly NOT a "tragi-comic, romantic whodunnit",
despite the IMDb plot summary. It's a tale of quiet desperation and
pervasive sadness that dares to violate pretty much every unwritten
rule in the movie business… further off the wall than "Being John
Malkovich" but infinitely more subtle and ultimately smarter.

On the surface it's a tale narrated by an idiot (a dead one at that)
which signifies very little. Set in a run-down hotel in which
mentally-ill derelicts and freaks are squatting, the film primarily
follows Tom-Tom (Jeremy Daviess), a deceptively simple fool who is
madly in love with a schizophrenic girl (Milla Jovovich)–who is a
heartachingly beautiful hybrid of the Virgin Mary and the Whore of
Babylon. The plot is fairly intriguing– Hardass cop Mel Gibson is
investigating the mysterious death of a tycoon's prodigal junkie son.
The crazies at the hotel devise an elaborate con job to profit from
this tragedy… provided they can bluff a snooty art critic and keep
the cops distracted.

Some humorous moments ensue. But the plot is almost irrelevant here.
The film works because of the engaging oddball characters (especially
Peter Stormare as an obsessive Beatles fan and Jimmy Smits as a bizarre
Native American "artist"), because of the brilliantly surreal,
postapocalyptic cinematography, and because the sheer naked unhappiness
of the film crawls inside of you and doesn't go away for several days.
Bono's script, like the best of his music, is deeply cynical about
society, but retains a faith in the salvation of individuals. It is
neither a comedy, a drama, or a romance… it really just plays out
like a bittersweet existential ballad. The only romantic scene features
an idiot and a schizoid whore who never actually have sex… but it's
one of the most touching love scenes ever captured on film. If that
sounds like your cup of tea, check out "The Million Dollar Hotel". I
don't think you'll be disappointed.