The Legend of Drunken Master 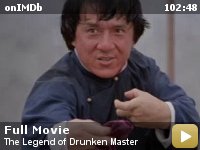 A young martial artist is caught between respecting his pacifist father's wishes or stopping a group of disrespectful foreigners from stealing precious artifacts.

Storyline
Returning home with his father after a shopping expedition, Wong Fei-Hong is unwittingly caught up in the battle between foreigners who wish to export ancient Chinese artifacts and loyalists who don't want the pieces to leave the country. Fei-Hong has learned a style of fighting called "Drunken Boxing", which makes him a dangerous person to cross. Unfortunately, his father is opposed to his engaging in any kind of fighting, let alone drunken boxing. Consequently, Fei-Hong not only has to fight against the foreigners, but he must overcome his father's antagonism as well.

Jackie Chan's character is supposed to be half the age the actor was at the time of filming.

Continuity:
The burns Fei-Hung receives to his hands and face in the final battle when he falls into the hot coals disappear right before he drinks.

Wong Fei-hung:
[Drinking some very strong alcohol in the middle of a fight]
What the hell is that?

Mrs. Wong:
What does it mean when there's a picture of a skull?

The BEST martial arts movie EVER

This is it. The single greatest Kung Fu movie ever made. This is the
ultimate Kung Fu movie with the ultimate Kung Fu star, Jackie Chan. His
entire career has culminated in to this one, great opus. Jackie performs
feats of physical agility that will blow your mind, despite being about 40
years old when he made this movie. The story is about the fabled fighter
Huang Fe-Hung who encounters corrupt industrialists that are exporting some
of China's greatest historical treasures to increase their profits.
Naturally Fe-Hung takes up the fight against them, and faces the deadly Ax
Gang and finally a dangerous Tae Kwon Do stylist in the movies eye popping
final fight scene. (That Tae Kwon Do fighter is actually Jackie's real life
body guard. He stepped in as the chief villain because Ho SUng Pak hurt his
ankle and was unable to perform the complicated fight sequences required.)


Fe-Hung doles out justice throughout the film with his unique fighting
style, drunken boxing, despite ridicule by his opponents, insisting that
drunken boxing is inferior. Needless to say, Jackie proves them wrong.

Historically speaking, the real Huang Fe-Hung did not use drunken boxing at
all. In fact, he was a practioner of the much more effective style of Kung
Fu called Hung-Gar. And his exploits can be alikened more to the Jesse
James of America's old west. But Fe-Hung was more commonly found fighting
for the underdog and battling tyranny. However, of all the innumerable
depictions of Huang Fe-Hung "DRUNKEN MASTER 2" is by far the best.

This movie can be described as a "Big Budget" Kung Fu movie, done in a very
traditional period style. The cinematography, direction, action sequencing,
writing, and story line are all TOP KNOTCH. There has never been a Kung Fu
movie made that is "better" than this one. And there has never been better
fight choreography.

As you might well expect, there are some breath-taking stunts. And this is
the movie that has the fire stunt responsible for Jackie's skin graft on his
arm. He did not get burned so severly until the THIRD take! He wasn't
happy with the first two. And if that is not painful enough to watch, then
check out the fight against the Ax Gang, when one member gets knocked of the
up-stairs portion of the restaraunt and slams into a cross
beam before smashing in to the floor.

If you are looking for the best martial arts flick ever, this is it.

TagsChina THIRD USA
The Ladies Man
Requiem for a Dream