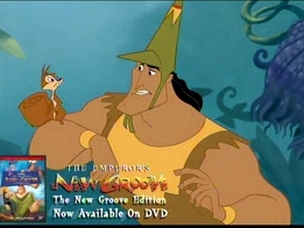 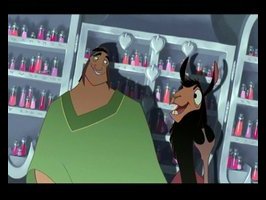 Emperor Kuzco is turned into a llama by his ex-administrator Yzma, and must now regain his throne with the help of Pacha, the gentle llama herder.

Storyline
In this animated comedy from the folks at Disney, the vain and cocky Emperor Kuzco is a very busy man. Besides maintaining his "groove", and firing his suspicious administrator, Yzma; he's also planning to build a new waterpark just for himself for his birthday. However, this means destroying one of the villages in his kingdom. Meanwhile, Yzma is hatching a plan to get revenge and usurp the throne. But, in a botched assassination courtesy of Yzma's right-hand man, Kronk, Kuzco is magically transformed into a llama. Now, Kuzco finds himself the property of Pacha, a lowly llama herder whose home is ground zero for the water park. Upon discovering the llama's true self, Pacha offers to help resolve the Emperor's problem and regain his throne, only if he promises to move his water park.

In the diner where Kuzco and Pacha go to eat, the salt and pepper shakers on the table are shaped like llamas.

Continuity:
After Pacha saves Llama Kuzco from drowning and lays him on the bank, Kuzco's mouth is wide open and his tongue is clearly sticking out. But when Pacha is about to give the kiss of life, he has to open Kuzco's mouth and the tongue pops out again.

ChiCha:
So what did the emperor want?

Pacha:
Uh, you know what? He couldn't see me.

ChiCha:
Couldn't see you? Why not?

Pacha:
Well, he is the emperor. I'm sure he's busy.

ChiCha:
No no no no. Emperor or no Emperor, it's called common courtesy. If it were me, I'd march right back there and *demand* to see him. You know I would!

ChiCha:
Pacha, I'm fine. This baby's not coming out for a while, but even if it was, I'd give that guy a piece of my mind. That kind of behavior just, just…
[snorts]

Hard to see why it wasn't a wildly popular mega-hit – I have two theories,
one charitable, one not. The charitable theory is that people were put off
by the title. MY heart certainly sank when I heard it. I mean, just say it
out loud – "The Emperor's New Groove" – now how could a good movie POSSIBLY
have a title like that?

Yet now, I rather like the title. It fits the story; it doesn't care if
it's fashionable or not; it's just so pleasingly RIGHT – but in an almost
indescribable way you'll have to watch the film to find out. Maybe it WAS a
marketing mistake. Who cares? I never took seriously the charge that
Disney's artistic decisions were made by its marketing department,
anyway.

That was the charitable explanation for why it made considerably less,
inflation adjusted, than every other one of Disney's animated features from
"Beauty and the Beast" on, and failed to even get nominated for a "Best
Picture" Oscar in a year in which they had difficulty coming up with
half-plausible candidates. The uncharitable explanation is probably closer
to the truth. People are idiots. This is a classic – but it's also
animated – by pencil on paper rather than finger on keyboard – so who will
ever notice?

Doubt me? You won't once you've seen it. Everyone to speak of who did
reports that it's very, very funny, and they're right – and trust me,
nothing is ever THIS funny unless it's clever and witty as well. It goes
without saying that their character animation is unmatched in its brilliance
and … I've already used the words "humour" and "wit"? Well, I'll use them
again. In addition there's a charming dottiness that a merely hip film
could never quite capture. Art direction is perfectly judged and consistent
throughout, with a pleasing absence of because-we-can computer
effects.

Here's just ONE example of what I'm talking about. One side of the
emperor's palace consists of this HUGE golden face, and we find out in a
funny scene (but they're all funny) that all excess water is drained out
through the nostrils. But that's not all we see. We see characters
crawling out of the nostrils, we see someone dangling like a big booger on a
rope out of one of the nostrils – one snot gag after another – yet no
explicit camerawork ever draws our attention to them. Not only do the
characters deliver their lines perfectly deadpan, the camera delivers its
images perfectly deadpan. It's just perfect.

Two more things I should mention. Unlike Disney's other recent features, it
never, not even for a second, feels as though the story has been unduly
compressed – and at 78 minutes it's a trifle shorter than
most.

Also, despite the constant hilarity, it's rather touching.

No movie I've seen in the past six months has filled me with such joy.
Well, perhaps there have been a few others, but they were all made long
ago.