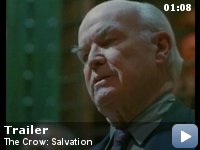 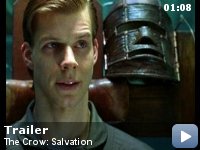 Alex Corvis returns to the world of the living to solve the murder of a young woman that he was wrongly accused of.

Storyline
The third entry in 'The Crow' series follows Alex Corvis, who was framed for the murder of his girlfriend and is executed. he is then brought back from the dead by a crow when the legend says 'Love is stronger than death'. He returns to discover that a corrupt police force is behind her murder and for him to go after the killers, he must find out the mystery behind everything that happened.

Taglines:
For Vengeance, For Justice, For Love.

Rob Zombie was originally set to write, direct and supervise the music for the movie, but he was fired because of creative differences with the producers. Zombie's song "Living Dead Girl" was used for the film.

Continuity:
In various close-ups of Alex Corvis, his hair is much shorter than it is at all other times in the movie.

Alex Corvis (The Crow):
[girl screams after Alex's head hit the window]
You're up!

Great plot and nice ideas in an underdeveloped movie

"The Crow: Salvation," the fourth installment in the popular series of
murdered men brought back from the dead to avenge their deaths, is certainly
a step in the right direction after the travesty of previous entries. The
first Crow, which is best known for being the film in which Brandon Lee was
killed (duh), is a cult classic directed by Alex "Dark City" Proyas, and
even today, it is regarded as probably the greatest of the
gothic/action/modern noir films. It's sequel, "The Crow: City of Angels,"
starred Vincent Perez, and while it featured some nice ideas and beautiful
images, it was nothing more but a poor remake of the first film lacking all
the heart of the original. "The Crow: Stairway to Heaven" came next, and it
was two episodes of the TV show of the same name re-edited into a motion
picture and released as a sequel to the first film. Instead of being a
remake in disguise as a sequel like "City of Angels," "Stairway" goes ahead
and just literally remakes the first film with the same characters,
basically the same plotline, and none of the magic (though Mark Ducascos as
the title character certainly demonstrates a type of charisma in his martial
arts).


Now comes "The Crow: Salvation." Eric Mabius stars as Alex Corvez, who is
wrongly executed for the murder of his girlfriend and returns from the dead
to take out the real killers, with the help of his dead girlfriend's sister
and a lawyer friend. As a sequel, it thankfully works because it has a
premise completely different from the first film (something the other
sequels failed to pull off) and it stands on its own, introducing its own
magic and its own intruiging plot elements. It certainly is a good film and
a good sequel, and while some points in the movie seem contrived, what film
nowadays doesn't have at least a few obvious plot points?

The bad: Much of the film is underdeveloped, especially many characters.
While the plotline is good, it seems rushed much of the time, and the viewer
has to draw their own conclusions about many things. Some of the dialogue is
also atrocious.

The good: Well well, there's much more of that. Eric Mabius as the central
character shines throughtout. For the first time, we have a character in one
of these movies *not* ripping off Brandon Lee, but instead, bringing his own
qualities and characterizations to the character. The results are an
effective performance that makes us forget about Lee altogether…at least
until the film comes to a close.
The plot, something of a murder mystery, would have made a good film even if
it hadn't been a Crow film, and the images and notions presented only add to
the appeal, especially with the character of the Crow itself, which at the
beginning, acts as if this is just a routine thing to bring someone back to
the dead, and that he's done it before. Later, however, it genuinely gets
intruigued by Corvis' vendetta and begins aiding him more.

All in all, this is certainly much more acceptable that previous entries,
and it succeeds where the others failed: Introducing new elements into a
Crow franchise that, so far, has been nothing more but rip offs of the first
film.