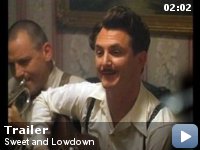 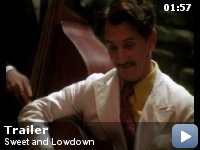 In the 1930s, fictional jazz guitarist Emmet Ray idolizes Django Reinhardt, faces gangsters and falls in love with a mute.

Storyline
A comedic biopic focused on the life of fictional jazz guitarist Emmett Ray. Ray was an irresponsible, free-spending, arrogant, obnoxious, alcohol-abusing, miserable human being, who was also arguably the best guitarist in the world. We follow Ray's life: bouts of getting drunk, his bizzare hobbies of shooting rats and watching passing trains, his dreams of fame and fortune, his strange obsession with the better-known guitarist Django Reinhardt, and of course, playing his beautiful music.

Woody Allen pays a clever homage to Federico Fellini's
La Strada. The characters of Emmet (Penn) and Hattie (Morton) correspond to Zampano (Quinn) and Gelsomina (Masina) including the final scene with Emmet's/Zampano's breakdown and repentance.

Revealing mistakes:
The guitar that Emmett destroys at the end of the movie is (thankfully) not a genuine Selmer Maccaferri. The shattered fragments clearly show a bolt-on neck. The genuine instruments used a bolt during construction, but this bolt was removed before the guitar was completed, leaving an empty hole. (The instrument actually destroyed was a disposable prop created by Michael Dunn.)

Emmet Ray:
This is my one day off, I want a talking girl.


A slow, rich movie. Though it lags in places, the three lead
performances are indelibly written in my memory. And the great jazz
soundtrack and warm colors made this movie go down like a glass of
bourbon.

Embodying the archetypal difficult genius, Emmet Ray is an almost
cartoonishly dislikable guy. But Sean Penn keeps him just this side of
sympathetic; we loathe his actions, we curse his self-destructiveness,
and yet we're compelled to keep watching in the increasingly futile
hope he'll turn himself around. His last scenes are heartrending.

As Hattie, Samantha Morton strikes a perfect, almost Chaplinesque,
balance of comedy and tragedy. The line separating the two is
razor-thin; she dances gracefully upon it. I could say more, but
perhaps appropriately, it's difficult to find words that capture the
beauty of her silent performance. Half the joy is in watching her
reactions naturally unfold anyway.

Like Penn, Uma Thurman portrays a pretty unlikeable character. Her
Blanche is overly intellectual, questions incessantly and is in some
ways just as emotionally alienated as Emmett. Though her character is
grating at first (particularly in contrast to Morton), Thurman does not
shrink from the less flattering aspects of her character. It's a brave
performance in a thankless role.

Woody Allen has constructed a thoughtful meditation on the nature of
artistry. Not on celebrity — we all know how that film turned out —
but on the rights and responsibilities of the true artist. Emmett,
Hattie and Blanche represent the axis of artists, fans and critics
respectively. As their relationships play out — naturally, inexorably
and poignantly — the viewer gets a rare treat: a film that plucks at
the mind and at the heart as gracefully as Emmett picking his guitar
strings.