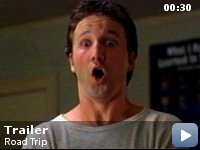 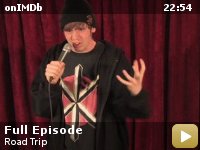 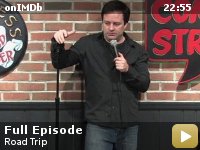 Four friends take off on an 1800 mile road trip to retrieve an illicit tape mistakenly mailed to a girl friend.

Storyline
Josh and Tiffany have been together since they were kids. ENTER Beth, a sexy blonde going to college with Josh. One night, Josh and Beth hook up and make a videotape the same day that Josh plans to mail a video to Tiffany of him talking about college life. The wrong tape gets sent, forcing Josh, along with a few pals, to go to Austin, where Tiffany is, and stop her from seeing the tape. Full of laughs, you'll be sure to enjoy Road Trip.

Taglines:
The greatest college tradition of all time.

Although there is no actual Ithaca University, the writers (Todd Phillips and 'Armstrong, Scot') both are alumni of Ithaca College in Ithaca, NY, and the movie is partly based on their time there.

Errors made by characters (possibly deliberate errors by the filmmakers):
They say the trip is roughly 18,000 miles and they have 3 days to do it. This would mean that if they travelled by car for the full 72 hours they would have to average 250mph which is not possible in a car, something which Rubin, as a physicist would have known.

Barry:
Welcome to the University of Ithica. This is it, right here. This is what we're talkin about. I'm gonna give you a good tour today. Show you as much, as much as you need to know, plus a, plus a whole lt more actually. So this is the main area of the University. You'll be getting used to this area. This is sort of where you congregate with your friends and classmates. Come in around me everyone, come in around me. Don't straggle. We've had prblems…
[…]

Usually this kind of film turns me off, but I was talked into watching
'Road Trip' with a bunch of college buddies and a couple of
twelve-packs, and I couldn't stop laughing.

Josh (Breckin Meyer) has loved Tiffany (Rachel Blanchard) since they
were both five years old. But Josh attends college in upstate New York,
while Tiffany has gone to school in Texas. Josh's friends think he's
crazy to keep up a long-distance relationship when there are plenty of
girls around to . . . date. Particularly alluring is Beth (Amy Smart),
who has the hots for Josh. When Josh is unable to locate Tiffany by
phone and begins to suspect that she's been cheating on him, he gives
in to his urges and brings Beth back to his dorm room for a night of
hot love. Beth, eager to show how wild she can be, decides to videotape
the encounter. The next day, Josh finds out that he couldn't reach
Tiffany because of a family emergency, and is immediately wracked with
guilt. Things get more complicated when his knuckleheaded suitemate
Barry mistakes the sex tape for a video message to Tiffany which Josh
had asked him to drop in the mail. Horrified at the thought of Tiffany
popping a tape into the VCR to see him making the double-backed beast
with another girl, Josh determines to travel to Texas to intercept the
illicit tape. His two best friends–resident prankster E.L. (Sean W.
Scott) and stoner-intellectual Rubin (Paul Costanzo)–offer to come
along, and help Josh persuade mega-nerd Kyle (D.J. Qualls) to let them
use his father's car in exchange for a chance to come along for the
ride.

From that point on, 'Road Trip' follows the traditional teen
exploitation comedy format, though with greater wit and intelligence
than should be expected from the genre. Director Todd Phillips manages
to give us slapstick, gross-out comedy while simultaneously poking fun
at stereotypes and experiences familiar to anyone who's gone to college
(psycho-sorority hazing, TAs trying to make undergrad girls, alcohol-
and pot-related shenanigans, the nerd breaking bad, a hilarious run-in
at an all-black fraternity house,etc.). Compensating for the adolescent
hijinks is the surprisingly smart and thoughtful subplot for Kyle, who
transforms from nerdy object of derision into the film's most likable
and memorable character.

In the tradition of 'Animal House,' 'Road Trip' is crass and juvenile,
but irresistibly funny. Not a movie for date night, but a good choice
for gathering around the tube with bongs, brews, and bros. An instant
joe six-pack classic.