Requiem for a Dream 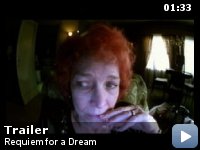 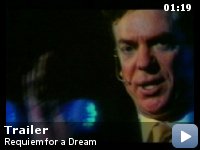 The drug-induced utopias of four Coney Island individuals are shattered when their addictions become stronger.

Storyline
Drugs. They consume mind, body and soul. Once you're hooked, you're hooked. Four lives. Four addicts. Four failures. Despite their aspirations of greatness, they succumb to their addictions. Watching the addicts spiral out of control, we bear witness to the dirtiest, ugliest portions of the underworld addicts reside in. It is shocking and eye-opening but demands to be seen by both addicts and non-addicts alike.

Taglines:
From the director of [Pi]

The overhead shot of Marion in the bathtub followed by her screaming underwater was an exact replica of a shot in the Japanese animated thriller,
Perfect Blue. Darren Aronofsky bought the remake rights to the film just to use that one sequence.

Factual errors:
Sara is given multiple jolts of ECT while fully conscious. Real ECT patients are always anesthetized and are only given shocks bilaterally, never on both sides at the same time.

Tappy Tibbons:
Be excited, be, be excited.

I'm not going to waste space with a synopsis, as every second or third
review provides one. A good indication of a challenging and original film
is
the number of 1/10 and 10/10 reviews, where the 1/10 reviews consist of
just
a few lines. A pretty sure sign that those folks weren't able or willing
to
watch with an open mind. Which is a good sign for casual viewers to give
this film a wide berth.


I wish everyone I care about would see Requiem for a Dream. Not because
they will like it, or that it will teach them something they did not
already
know, but that it's a rare piece of work that will challenge and probably
change them. It's a film that has never been made before, with nothing
to
compare to it – a rarity these days. I often find myself recommending
films
to people that I am unable to briefly describe. These are usually the
most
involving and affecting ones. I'd like my family to see this, but can't
*recommend* it to them. I've recommended it to two friends, and they
both
had the same reaction: I am glad I watched it, but I doubt I'll be in
the
frame of mind to watch it again, knowing what you feel.

As I sat watching the credits roll, I began crying, but I'm still not
sure
why. Partly in reaction to the devastatingly tragic ending, partly the
beauty (yes) of the film, partly my gratitude for good things in my life.
I
watched it again the same night with my girlfriend, not because I wanted
to
upset her, but I felt that I had to share it. After the credits rolled,
we
both were silent for a good ten minutes. I found that I had thoughts I
wanted to express, but could find no words. This is one of the few films
that are painful to experience, but I feel compelled to share with people
I
care about. Some others in that short list include The Thin Red Line,
Happiness, River's Edge,and The Deer Hunter.

These films all share a quality that's difficult to name. No one likes
feeling disturbed or shattered by a film, a work of art, a piece of
music,
but I feel experiencing these emotions and being asked to think, not just
be
entertained, is important now and then.

"Favorite" does not apply to this for me – this isn't about
entertainment.
One of the most devastating and beautiful experiences I've had watching a
film. One of the top five films I've ever seen.