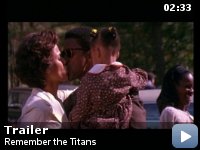 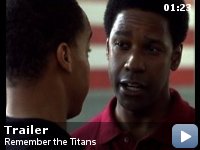 The true story of a newly appointed African-American coach and his high school team on their first season as a racially integrated unit.

Storyline
Suburban Virginia schools have been segregated for generations, in sight of the Washington Monument over the river in the nation's capital. One Black and one White high school are closed and the students sent to T.C. Williams High School under federal mandate to integrate. The year is seen through the eyes of the football team where the man hired to coach the Black school is made head coach over the highly successful white coach. Based on the actual events of 1971, the team becomes the unifying symbol for the community as the boys and the adults learn to depend on and trust each other.

Taglines:
History is written by the winners.

The state championship game was played at 12 o'clock noon on Saturday, not at night as portrayed in the movie.

Errors made by characters (possibly deliberate errors by the filmmakers):
While at Gettysburg, Coach Boone says 50,000 men died there during the Battle of Gettysburg during the Civil War. There were approximately 50,000 casualties (killed/wounded/missing), but the actual number killed was much lower.

Coach Paul 'Doc' Hines:
You have twelve brothers and sisters?

By looking at REMEMBER THE TITANS you are probably saying "oh geeze, another
football movie. How can this one be any better than the last one? The only
good recent football film is RUDY." Well, after seeing this film, you'll be
taken by surprise, just like I was.

In 1971, in Alexandria, Virginia, the town's high school football team, the
T.C. Williams Titans, are very popular. T.C. Williams High School current
football coach, Coach Yoast (Will Patton), is nominated for high school Hall
of Fame. But a few weeks before the start of the school year, a
white store owner shoots and kills a black man who was suspected in stealing
a product. This causes a racial seperation between blacks and whites in
Alexandria. Then just before the start of the football season, Coach Yoast
gets demoted to Assistant Coach in place of Coach Boone (Denzel Washington).
What's bad is that Boone is black, and Yoast is white. Most of the town's
residents are angry, and even some of the players are willing to ruin their
football career's to quit the team to make a statement. But at the start of
football camp, Coach Boone won't take any racial diversity. Boone treats
all of his players equally, he has his football camp practices appear to be
a mixture between boot camp and group sessions. If the player misses
catching a football, he has to run a mile. If the player doesn't know
anything about the person of the opposite color that they are rooming with,
they have homework to get to know one another. With this, it creates a
special bond between these men. Men who act more mature and humane, unlike
most of the residents of Alexandria. But when Coach Boone and Coach Yoast
prove that the Titans are a winning team, the issue of race is erased and
the true meaning of teamwork is born.

The way to make a great sports movie is to have it be adapted from a true
life story. Like PRIDE OF THE YANKEES, HOOSIERS, and RUDY, all are films
that show that what appears to be a sport, is the true triumph of the
human spirit. I really did enjoy the characters in the film, since they are
factual, they have very humanistic qualities. While one loves to hum "Ain't
No Mountain High Enough," another gets excited while listening to "Act
Naturally." And although you can guess what happens in the end, you don't
care. You enjoy and like the character's so much that you are cheering for
them.

I highly enjoyed the acting in this film. I think if Denzel Washington
should get his long overdue Oscar for Best Actor, it should be for this
film. He teaches his team that black or white, these men are a team, and
that the only way to win is teamwork. Washington gives a bravura
performance, that it will stun the people who think that Washington usually
plays "racist" roles. I also enjoyed Will Patton a lot, he's not playing
the cliche coach who gets demoted, and wants to ruin the new head coach.
Instead, he understands the message that Boone is giving to the team that he
helps as much as he can to help the team succeed. I thought Patton's role
is the best assistant coach role that I have seen since Dennis Hopper's role
in HOOSERS. And the football players are also great, the ones I thought
stood out were: Preston Brant (Jerry Buck, the team's captain), Donald
Adensun (Petey, the team's running-back), Kip Perdue (Sunshine, the team's
quarterback), Craig Kirkwood (Rev, the team's defense player), and Ethan
Suplee (Lastik,
the team's leading defense, and by his size, he should be!) I was glad to
see Suplee change his roles in his career. The last time I remember seeing
him, he was the vicious skinhead along with Edward Norton and Patrick
Furlong in AMERICAN HISTORY X. In REMEMBER THE TITANS, he's the exact
opposite, he's the first white player who makes friends with the black
players!!!

Director Boaz Yakin and producer Jerry Bruckheimer should be commended for
this film.

I am pleased to see Jerry Bruckheimer made a really enjoyable and
intellectual film, which is the complete opposite of the type of films that
he's famous for. In fact I think this is the first one intellectual film
Bruckheimer has made! The message that it sends out is really powerful, and
if it doesn't convince you to change, then you are probably dead. And
director Boaz Yakin does a fantastic job with this film, that along with
Cameron Crowe, Wolfgang Petersen, and Ridley Scott, he should be nominated
best director.

This is quite a film, in fact, I think this is the best football movie that
I have ever seen! I really really enjoyed this film, and as I left it led
me to believe in the message that this film was sending to it's audience.
And this being only "PG" and put out by Walt Disney Pictures, I would love
to see both junior high schools and high schools to show this film to it's
students. If they did, then chances are, the violence in schools will go
down. And it took Jerry Bruckheimer, Boaz Yakin, and Walt Disney Pictures
to do it. Great job guys! Don't miss this enjoyable film!
***** (out of five)

TagsGeorgia USA
The Crimson Rivers
Dancer in the Dark