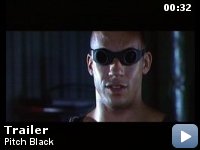 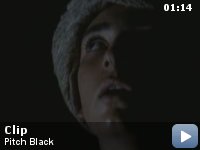 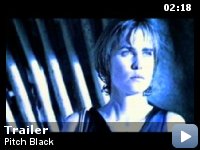 A group of marooned space travelers struggle for survival on a seemingly lifeless sun-scorched world.

Storyline
The space transport vessel "Hunter-Gratzner" carrying 40 people on-board crashes on a desert planet when the ship is struck in a meteor storm. There are only 12 survivors, among them are pilot Carolyn Fry (Who has assumed command after the ship's captain is killed), bounty hunter William J. Johns, religious man Abu Al-Walid, Antiques dealer Paris P. Ogilvie, runaway teenager Jack, settlers John 'Zeke' Ezekiel and his lover Sharon 'Shazza' Montgomery and Richard B. Riddick, a dangerous escaped convict. Marooned, the 10 survivors finds the barren and hot desert-scape has sunlight from three suns. Not only they find food and water, and worry about Riddick, the survivors find themselves being hunted by the planet's flesh-eating alien inhabitants, when the planet is engulfed in darkness, which happens every 22 years, as they come out on to the surface to hunt and eat all signs of life…

Taglines:
There's only one rule: Stay in the light

While waiting between takes the lighting team would set up several 5k lights to allow the rest of the crew to warm up, before they had to go back to work in the sub 50F weather.

Audio/visual unsynchronized:
During Fry and John's discussion about his drug habits, Fry's lips don't move during her last line.

Riddick:
[voiceover]
They say most of your brain shuts down in cryo-sleep. All but the primitive side, the animal side. No wonder I'm still awake. Transporting me with civilians. Sounded like 40, 40-plus. Heard an Arab voice. Some hoodoo holy man, probably on his way to New Mecca. But what route? What route? I smelt a woman. Sweat, boots, tool belt, leather. Prospector type. Free settlers. And they only take the back roads. And here's my real problem. Mr. Johns…

An Excellent use of Sci-Fi as a story telling medium

While most movies that pit humans against horrendous extra terrestrials
end
up being cheap imitations of the 'Aliens' series, Pitch Black stands as a
fine piece of Sci-Fi, and an excellent movie all around. Perhaps my
favorite aspect of the film is the lighting. This movie beautifully
employs
many different colors, shades and intensities of light which set the mood
and lend a unique feeling to the film itself, something different than the
'normal' movie lighting we are generally subjected to. Vin Diesel brings
his character to life in an excellent manner, skillfully avoiding the
routine portrayal of the hardened criminal. After all, the film is about
Riddick's (Diesel's character) personal journey, so thankfully Vin doesn't
drop the ball. The remainder of the cast (with the exception of the
talented and gorgeous Claudia Black) were unknown to me but all turned in
marvelous performances, animating the diverse characters with unique
quirks
and mannerisms. Pitch Black is a perfect example of making a great film
with out the resources of an excessive budget. The special effects are
more
than adequate, but at the same time they are by no means the sole focus,
as
in many high budget 'blockbusters'. It's a great movie because it uses
Science Fiction as a medium to tell an engaging, provoking story, rather
then telling a mediocre story to use the flash of Science
Fiction.