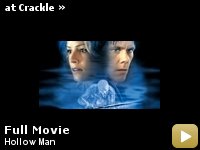 Scientists discover how to make people invisible, but their test subject becomes an insane killer who stalks them.

Storyline
Elisabeth Shue is Linda Foster, a scientist who is working on a serum to make people invisible. When another scientist tries the serum and becomes invisible his colleagues figure another way to bring him back to the normal world.

This is the first Hollywood movie of Paul Verhoeven that got an R-rating in its first submission to the MPAA. His previous American films,
RoboCop,
Total Recall,
Basic Instinct,
Showgirls and
Starship Troopers initially received X and NC-17 ratings, of which all except for Showgirls were re-cut to receive an R-rating.

Factual errors:
The pressurized tanks of flammable liquid that Linda uses to make a flamethrower are sitting unsecured in the lab. OSHA regulations require pressurized cylinders to be secured to prevent them from tipping over. The danger is that the top will get knocked off, and the tank will shoot around like a rocket. Any lab would have their tanks secured for this reason.

Sebastian Caine and his team have worked tirelessly to develop a formula
that can not only turn animals invisible but also bring them back to normal
at will. With Governmental pressure on them to show results, Sebastian
decides he will be the first human to try the formula. He becomes invisible
for a short time, however efforts to bring him back fail and he finds
himself stuck. As work continues on the formula, the others in the lab
begin to notice him becoming increasingly unhinged.


From director Verhoven the norm is to expect great special effects and
violence. He has also been known to integrate themes and good stories into
these mainly effects driven films. On this occasion however he fails to
really do that and is left with a fast paced and enjoyable film that makes
up in effects what it lacks in substance. The plot is pretty basic and
never goes deeper – Sebastian's descent into madness is not really a descent
so much as a short trip that is not really built to so much as just
delivered. In it's placed though, the effects are really impressive and
make the film worth seeing simply because, not only are they great, but they
are also used very well in the action rather than just being the film in
themselves.

The cast is OK but don't really have much to work with in terms of material.
Bacon is much more interesting when not on screen than when he is. His
character is too thin and he fails to portray any sort of `descent' in his
character's behaviour. Shue is pretty good and seems to enjoy running round
with a flamethrower. The rest of the cast are OK but basically just act as
fodder in the way that a normal slasher movie will have actors to be
disposed of as the film rolls.

Overall I really enjoyed this film as it is a very expensive special effects
movie which relies on spectacle to keep things moving. The effects are
great and take the mind away from the lack of real substance and the action
at the end is very enjoyable. A really good special effects movie as long
as you don't expect anything more.