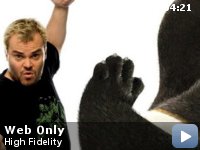 Rob, a record store owner and compulsive list maker, recounts his top five breakups, including the one in progress.

Storyline
High Fidelity follows the 'mid-life' crisis of Rob, a thirty-something record-store owner who must face the undeniable facts – he's growing up. In a hilarious homage to the music scene, Rob and the wacky, offbeat clerks that inhabit his store expound on the intricacies of life and song all the while trying to succeed in their adult relationships. Are they listening to pop music because they are miserable? Or are they miserable because they listen to pop music? This romantic comedy provides a whimsical glimpse into the male view of the affairs of the heart.

Taglines:
A comedy about fear of commitment, hating your job, falling in love and other pop favorites.

The song "Dry the Rain" by The Beta Band can actually be heard twice in the film. Once while trying to sell 5 copies of the 3 EP's, and once while Rob proposed to Laura.

Errors in geography:
While engaging in a monologue about his relationship woes, Rob boards a Purple Line Express train of the Chicago Transit Authority. The Purple Line Express boards at the Howard Station on the far north side of Chicago and does not stop until the Belmont Station in Lakeview. However, just after Cusack boards the train, it passes Lincoln Hand Laundry and Graceland Cemetery; thus he must have boarded in Edgewater, well before Belmont, despite the fact that the train he was on does not stop in that neighborhood. Moreover, the scene ends with the Purple Line train (the "Loop" destination indicator is visible behind his head) descending into the subway. However, the Purple Line Express does not use the subway, but rather the elevated tracks, going into the Loop and turning back around and proceeding back through the city into the north suburbs.

Rob:
What came first, the music or the misery? People worry about kids playing with guns, or watching violent videos, that some sort of culture of violence will take them over. Nobody worries about kids listening to thousands, literally thousands of songs about heartbreak, rejection, pain, misery and loss. Did I listen to pop music because I was miserable? Or was I miserable because I listened to pop music?


Having read the very good Nick Hornby novel of the same name I looked
forward to "High Fidelity" quite a bit, but I never expected it to be
as good as it is. This is easily one of the best comedies of all time
for its laughs alone – but what separates it from other comedies
(particularly new-age ones) is that it's a very poignant multi-layered
tale that focuses, primarily, on males – and why we are as we are.
Love, life, relationships, music, movies, hobbies, jobs, ticks, ups,
downs – everything is here.


It's to John Cusack's credit that he took a "classic" contemporary
novel set in London and transposed it to Chicago – and it works just as
well (if not better) than the British version. It shows what a
universal story this actually is, if so many people from all over the
world can appreciate it, no matter where it is set. What we lose here
are the abbreviations such as "mate," "cos" and other British
expressions – but essentially the story is exactly the same, as is the
character of Rob Gordon.

Cusack proves his worth here and there isn't a single bad performance
in this film, except perhaps for the love interest who tries to sport
an American accent and it's quite uneven at times.

Jack Black is fantastically funny and reveals once again why he's
leagues ahead of other obese comedians like Chris Farley who merely
relied on OTT acts and weight for laughs – Black, like John Candy,
actually acts and so far in his career has turned out some really good
films which is more than can be said for many of his competitors.

The script has some very funny one-liners and movie/music in-jokes (I
love the "Evil Dead" bit – "Because it's so funny, and violent, it's
got a kick-a$$ soundtrack…and it's so violent!").

But at the end of the day what really haunted me (so to speak) about
this movie long after I had seen it was the fact that it DOES stay with
you ages after the credits have stopped rolling. It's poignant and
really spot-on in many regards – add that to a film full of flawless
performances and great direction and clever ideas and one-liners and
jokes, and you've got a top-notch comedic masterpiece that places "High
Fidelity" in the top ranks of American (and British!) comedy – "with,"
as the DVD back cover says, "a bullet." Highly recommended. 5/5

TagsUSA
Romeo Must Die
Return to Me