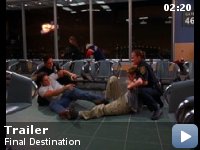 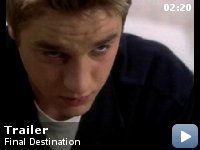 After a teenager has a terrifying vision of him and his friends dying in a plane crash, he prevents the accident only to have Death hunt them down, one by one.

Storyline
Alex is boarding his plane to France on a school trip, when he suddenly gets a premonition that the plane will explode. When Alex and a group of students are thrown off the plane, to their horror, the plane does in fact explode. Alex must now work out Death's plan, as each of the surviving students falls victim. Whilst preventing the worst from happening, Alex must also dodge the FBI, which believes Alex caused the explosion.

Taglines:
Death Doesn't Take No For An Answer.

The numerous appearances of "180" in the movie refer to the film's original title of "Flight 180". New Line decided to rename the film to "Final Destination" through fear of confusion of other movies like
Air Force One or
Con Air.

Crew or equipment visible:
In the scene before Terry's death, there is clearly a stunt double used when Carter knocks Billy off his bike.

Alex Browning:
What if there is a design?

Final Destination, or ‘Flight 180' as it was titled right up until the last
minute, was a surprise hit of 2000. It was made with a modest budget of
$23m it grossed a nice sum of $53m in the US. It was in the UK, however,
where the film really shone, up against the massive epic Gladiator at the
time the movie managed to gross a none too bad £11m but what made it better
was it was a true sleeper hit, it spent 14 weeks in the UK film charts.
With no big name actors, and no major publicity the film did so well
because
of word of mouth and the word was it was damn good.


I admit I was sceptical at first in reading about Final Destination. It
seemed like a tired teen horror movie that seemed to be spewing out of
America at that time, indeed it was only until about 3 weeks in to it being
released that I actually lifted my bum off my sofa and put my bum on the
seat in front of the big screen to actually watch the movie. I loved it,
and it was made better by the low expectations I had of it. It isn't
groundbreaking but it is effectively chilly at times, the acting is
surprisingly good and the plot is pretty fresh.

James Wong (X Files) came up with the idea of the movie, about cheating
death, and it does seem to have a kind of X Files ring to it. The story
goes as follows. Alex (Devon Sawa) is off, with his classmates, to France.
Now being in America France is like our version of…America, so it's a
pretty
big deal. While on the plane he has a premonition of the plane exploding,
slightly scared, he wakes up and finds that some of his premonition turns
out real. Scared for his life, and the others on the plane, he cause a
fuss
which sees him and several other classmates chucked off the plane. Some of
his companions are none too pleased…until they see Flight 180 blow up,
killing everyone on the plane.

Thus begins the cat and mouse chase by Death himself. One by one, in
seemingly ‘accidental' ways, the survivors of the ill-fated crash are
dying.
While others dismiss the idea of Death coming for revenge, Alex isn't
going
to let it go and soon he convinces friend Clear (Ali Larter) that it is up
to them to try and stop Death himself.

As this happens we can witness some of the most imaginative death scenes
ever. Thanks to the movie not having a masked killer doing the rounds the
death scenes are not limited to the ‘knife in back/stomach/head/eye'
routine. Indeed, the first death scene is both funny and horrific all in
one because, like with many of the deaths in this movie, it can really seem
as that can actually happen. It gives you something to think
about.

The special effects, for a movie with as small as budget as this, are
excellent (apparently they did actually spend half of their budget in the
SFX). The plane crash is one of the most realistic you will see, its
worrying to watch.

For a movie aimed at the teenager end of the market, and for a genre
renowned for hammy acting, the people in this movie actually do a good job.

Devon Sawa, no stranger to movies, is perfect at playing the lead role of
the troubled Alex. Kerr Smith (Dawson's Creek) does a major turnaround
from
what you are used to seeing him as, this time he's the typical school jock,
flash car, blonde girlfriend, bad temper, but luckily he doesn't play it
into overkill. Another nice surprise is Sean William Scott (American Pie,
Road Trip, Too many teen movies), while we are used to seeing him as the
guy
who cracks jokes and makes fun of the others, he plays the geeky guy this
time, and he provides us with quite a bit of comic relief. We also have a
nice cameo of Tony Todd (aka the Candyman) as Bludworth, who plays the man
at the morgue, he is suitably chilling, and is set to play a larger part in
the sequel.

Suspense wise this film doesn't fail either. In many films like this you
are guessing who will be killed next. Not so in this movie. You are
actually told who is going to meet Death next. However this doesn't spoil
it. Suspense is carried over by how the person will die. If you know a
person is going to die as soon as the camera pans of them, and their all
alone, then your waiting in anticipation for them to die, but there are
many
false scares along the way. Also the suspense is kept up throughout the
movie, it doesn't seem to drag too much at any time.

There are very few bad points to the movie. Obviously it will depend on
your taste whether you like it or not, whether you consider it too ‘teeny'
or too teeny but just right anyway. This film does have fun as well as
generate scares.

It is worth noting that there is an alternate ending to the movie and quite
a few deleted scenes, namely a main subplot where Clear becomes pregnant.
I
think that it was wise to omit these parts, the ending seemed cheesy, but
the one we are left with is excellent.

Final Destination, thanks to an imaginative story, nice acting and some
elaborate death scenes breathes new life into the tired genre of teen
horror. It is not as widely recognized as the Scream trilogy, but in many
respects it's better. Lets hope the sequel maintains the high standard it
has set.

FINAL DESTINATION IS NOT