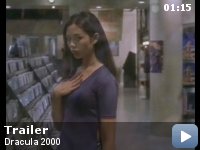 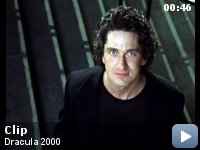 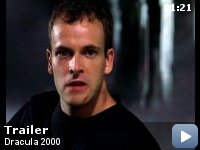 A group of thieves break into a chamber expecting to find paintings, but instead they release the count himself, who travels to New Orleans to find his nemesis' daughter, Mary Van Helsing.

Storyline
In the millenium version of this classic Gothic horror we find Abraham Van Helsing (Plummer), who has tangled with Count Dracula (Butler) in the past, working as an English antiques dealer. Simon (Miller) is a vampire hunter in training under his apprenticeship. Van Helsing and Simon travel from London to New Orleans to rescue Van Helsing's daughter Mary (Waddell) from the family's life long nemesis – Dracula.

Revealing mistakes:
The sidewalk that Mary lands on near the end of the film visibly vibrates when she hits it.

Solina:
You don't build this kind of security without a gold mine to hide.

Better Than You'd Think……(avec some spoilage)

So…the title is a bit dodgy. "Dracula 2000". Ick. Nevertheless, I was
pleasantly surprised by the quality of the film. To begin with, an
interesting cast. Christopher Plummer has, previously, suffered from
what I call "Michael Caine" syndrome; making any film that will write
him a cheque, Johnny Lee Miller was amusing in "Trainspotting" and,
let's not kid each other, there is no mystery as to why Jennifer
Esposito and Jeri Ryan were cast. Round it out with some second and
third tier young "Actors du jour" and you probably haven't spent too
much money.


Now…the most irritating aspect of the film is the almost surreal
amount of flagrant Virgin Records placement. Seriously….Mary works in
one of the stores which means we get prominent t-shirt coverage….not
to mention the gawdy neon sign, the truck in the garage
etc…..however, Dracula needs virgins, right?

By far the most interesting part of this film was the story behind the
creation of Dracula. Taking the myth back to the time of the
crucifixion, with Judas Iscariot suffering some fairly serious guilt
issues leading to his suicide and eventual "re-birth"….good angle: it
helped to explain the vampires aversion to all things holy and dislike
of silver (as in 30 pieces of…). Still don't get the mirror-phobia
but hey….

Someone on the creative team of this film has a sweet little visual gag
in store. Check out the scene in the Laffayette Cemetery…there is a
crypt bearing the name "Spencer Hepburn". Nice one.

The ending is a little rushed and it seems that Miller might have left
the set early that day, since he apparently vanishes. It also leaves
blatant amounts of room for a sequel, but I wouldn't hold my breath.

That I even considered seeing this film was primarily due to Wes
Craven's participation. However, I found it to be an imaginative and
fairly tasteful modernisation of one of the all-time cinematic horror
legends.