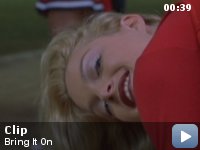 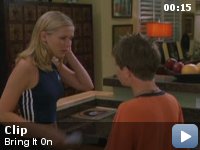 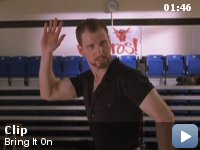 A champion high school cheerleading squad discovers its previous captain stole all their best routines from an inner-city school and must scramble to compete at this year's championships.

Storyline
The Toro cheerleading squad from Rancho Carne High School in San Diego has got spirit, spunk, sass and a killer routine that's sure to land them the national championship trophy for the sixth year in a row. But for newly-elected team captain Torrance, the Toros' road to total cheer glory takes a shady turn when she discovers that their perfectly-choreographed routines were in fact stolen from the Clovers, a hip-hop squad from East Compton, by the Toro's former captain. While the Toros scramble to come up with a new routine, the Clovers, led by squad captain Isis have their own problems – coming up with enough money to cover their travel expenses to the championships. With time running out and the pressure mounting, both captains drive their squads to the point of exhaustion: Torrance, hell bent on saving the Toros' reputation, and Isis more determined than ever to see that the Clovers finally get the recognition that they deserve…

The vintage rock t-shirts that Cliff wears throughout the film are from director Peyton Reed's extensive collection.

Incorrectly regarded as goofs:
One of the cheerleaders from the Toros appears also to be a cheerleader in the Clovers (she is very short with brown hair). They are, in fact, different girls, played by twin sisters. It still seems improbable that they would attend different high schools more than 100 miles apart, but this is not impossible.

Torrance Shipman:
You're a great cheerleader, Aaron, it's just that… maybe you're not exactly "boyfriend material". Buh-bye.

"Cheerleaders are dancers who have gone retarded," says Sparky, the modern
dance-influenced choreographer who from $2000 dollars a pop teaches
cheerleaders the mysteries of Fosse-inflected "happy fingers." Bring It On,
which was a surprise hit in the fall of 2000, clearly believes that
cheerleaders are far more than hoofers gone to seed. Despite the frequent
jokes at their expense in the film, Bring It On shows cheerleaders
are spirited, athletic, graceful, and most importantly, relevant to the 21st
Century. Colorfully shot, attractively cast, and snappily written, Bring It
On is hardly a great movie, but it's perfectly appealing for most people and
I'd guess that the millions of cheerleaders and former cheerleaders
nationwide will get a lot more out of it.


The plot is simple. It's like Rocky. Or Varsity Blues. Or any other sports
movie you've ever seen. New captain of the five time national cheerleading
champions Toros, Torrance (Kirsten Dunst) is shocked when the new girl on
the squad (Eliza Dushka), a gymnast, tells her that all of the routines that
made the squad famous were stolen from an inner city school in East Compton,
two hours up the coast. Determined to prove that they can do it themselves,
the Toros go through a fairly short journey to self-empowerment. There's a
pounding bass line, lots of teens in short skirts, some fun flipping, and a
lesson about being true to yourself and believing in others.

The film also takes on any number of myths about cheerleaders. Are male
cheerleaders all gay, or do they just like grabbing girls' rears? The
answer, of course is a little from column A and a little from Column B. Are
cheerleaders all airheads? Well, the issue of whether or not these girls go
to class is done away with in two minutes at the beginning of the film. From
that point on, education, books, and homework are never mentioned. Any
occasional signs of intelligence are held up to ridicule, though these
"sweater puppets" are all quick with a witty retort, so they must have
something going on upstairs. And finally, is cheerleading a sport? Well,
this film comes out firmly on the side of yes.

For all of its verve, Jessica Bendinger's script is too reductive for the
movie to be taken very seriously. The white girls are obviously upper scale
and spoiled. Naturally the white girls don't have any sass at first and
naturally they borrow it from their African-American neighbors. The black
girls are supposed to be poor. Not that that's really depicted in this
day-glo colored world.

In fact, through the wonders of Hollywood Central casting, the squad from
East Compton actually looked even more racially homogenous than the "Buffys"
from San Diego. This is an inner city high school that has a cheerleading
squad featuring a dozen girls with identical light complexions and straight
hair. The racial assumptions at work here would be offensive if the movie
placed any premium on reality. Instead, as directed by Peyton Reed,
everything is colorful, glossy, and easy on the eyes. The intricate
cheerleading routines are mostly shot from strange angles or awkward
close-ups to make it impossible to tell if the cast is actually doing any of
the cheering stunts at all.

When Kirsten Dunst makes good small movies (see The Virgin Suicides or
Dick), nobody goes to them. So I suppose it's fitting that this movie was a
smash. She's always an entertaining screen presence and for now she's still
young enough that it isn't ridiculous for her to keep playing high school
characters. How her career progresses as she matures remains to be seen. The
rest of the cast seems like they were picked from the set of a WB series.
Now since I kind of like a number of WB series, I don't mean this as an
insult in any way. The Warner Brothers network has proven a good training
ground for attractive young women to read catchy dialogue and everybody in
Bring It On seems very skilled with the zingers. And as the aforementioned
Sparky the choreographer, Ian Roberts is just hilarious and his scene is
easily the funniest part of the movie.

In the end, Bring It On is fairly satisfying. It's also amusing to note the
strange directions that this movie is able to stretch the limits of the
PG-13 rating in terms of language and certain forms of implied sexuality.
But that's neither here nor there. Bring it On gets a not-to-be-ashamed-of
6/10 from me.