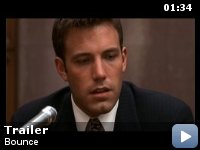 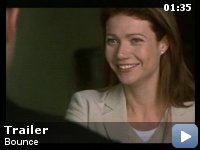 A man switches plane tickets with another man who dies in that plane in a crash. The man falls in love with the deceased one's wife.

Storyline
Buddy (Affleck) has just signed an airline in Chicago as a big client, but is ironically delayed at the airport waiting for a flight to LA on that same airline. He meets fellow passenger Greg, who opts to be bumped, even though it means missing an activity with his older son. When the flight gets resumed, Buddy thinks he's doing a good deed by swapping tickets with Greg so he can get home to his son. Sadly, the flight crashes. Buddy conspires with his friend, the ticket agent that night, to take his name off the passenger list and put Greg's on. Once he's back in LA, his new client dictates that the company run a series of feel-good ads about the crash. Buddy feels very hypocritical, and completely loses it when the commercials win a Cleo. After going through re-hab, he decides he needs to check on Greg's widow. But he doesn't plan on falling in love with her.

Taglines:
Two strangers fell in love. One knew it wasn't by chance.

Continuity:
Position of logo on the Diet Coke can when Buddy and Abby are eating at their first meeting. Also at his office when they are celebrating closing the deal.

Abby:
Ok, then nothing with knives, snakes or women that have to go undercover as hookers – – the videos.

Ben Affleck stars as Buddy Amaral, an arrogant hotshot advertising exec,
who, in a rare moment of kindness, offers his seat on an airplane to a young
writer desperate to get home to his wife and kids for the holidays. When
the man dies in a plane crash, Buddy is suddenly sent on a mission of
soul-searching, trying to sort out the complex emotions he is now forced to
deal with. When drinking provides no solution, he feels himself compelled
to seek out the man's widow, Abby, played by Gwyneth Paltrow, and their two
young boys. Buddy keeps his connection with them a secret as he begins to
fall in love with Abby and to become a part of their wounded
family.

In its bare-boned detailing, the plot may smack a bit of incredibility and
contrivance. But thanks to expert writing and directing by Don Ross, every
detail in the film feels just right. Take the opening scene, for instance.
Ross gives the chance encounter between the two strangers who will be
forever tied together by fate the loose, casual, and offhanded quality one
finds in real life. Nothing in this film ever seems forced, least of all
the romantic feelings these two hurt, vulnerable and attractive people feel
for one another. In fact, it is the complexity of the characters that helps
`Bounce' to rise above the superficiality of most films in this genre. In
addition to Buddy's character-building, we see Abby trying desperately to
overcome the bewildering tragedy that has befallen her, unsure of how to
deal with her own feelings of loss, guilt and anger that inevitable arise
from such a situation.

Affleck and Paltrow bring such an air of thoughtfulness and maturity to
their roles that we find ourselves genuinely caught up in their predicament
and rooting them on all the way. It's nice for a change to see a romantic
film truly centered on a pair of likable grownups as opposed to the
superannuated adolescents we usually find in films of this type. Here are
flawed, often weak, individuals who nevertheless contain cores of genuine
goodness and innate warmheartedness.

The movie also achieves additional depth and weight in its exploration of
the vagaries of fate as many of the characters examine the `what if'
scenarios that haunt anyone caught up in a situation like this
one.

`Bounce' is well written, directed and acted. Even those who don't normally
go for love stories should definitely check it out.

TagsLA USA
Men of Honor
But I'm a Cheerleader