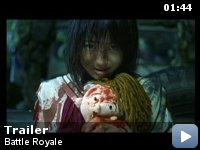 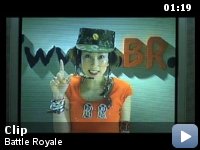 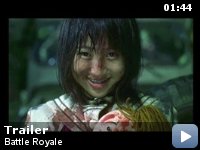 In the future, the Japanese government captures a class of ninth-grade students and forces them to kill each other under the revolutionary "Battle Royale" act.

Storyline
Forty-two students, three days, one deserted Island: welcome to Battle Royale. A group of ninth-grade students from a Japanese high school have been forced by legislation to compete in a Battle Royale. The students are each given a bag with a randomly selected weapon and a few rations of food and water and sent off to kill each other in a no-holds-barred (with a few minor rules) game to the death, which means that the students have three days to kill each other until one survives–or they all die. The movie focus on a few of the students and how they cope. Some decide to play the game like the psychotic Kiriyama or the sexual Mistuko, while others like the heroes of the movie–Shuya, Noriko, and Kawada–are trying to find a way to get off the Island without violence. However, as the numbers dwell down lower and lower on an hourly basis, is there any way for Shuya and classmates to survive?

Taglines:
Have you ever killed your best friend?

None of the cast had any stunt doubles, not even the lead, Tatsuya Fujiwara.

Revealing mistakes:
When characters stab or shoot each other through clothing, there are bloodstains but no holes where the bullets or knives go through.

Reporter:
This year Zentsuji Middle School number 4's Class E was chosen from among 43,000 Ninth grade classes. This year's game, said to be more blistering than the last – – Oh look there! There she is! The winner's a girl! Surviving a fierce battle that raged two days, seven hours, and 43 minutes – the winner is a girl! Look, she's smiling! Smiling! The girl definitely just smiled!

It's been two years since I saw this flick. What do I think?

Kinji Fukasaku made a film called Battle Royale back in 2000. He's made
plenty of films in the past. I've seen very few of them, apart from Battle
Royale but I'm always searching for more.

Battle Royale is a film that has affected many, many people. There are
rabid
fans of Battle Royale and there are even more people that hate it. Let me
tell you why. Battle Royale is a film that exercises its right to explore
an
idea. Many films have great ideas but most are poorly realized. Battle
Royale is simply an awesome movie about one of the most hypothetically
traumatic things that could ever happen to teenagers. For those that don't
know, the film focuses on what happens when a group of high school
students
are sent to an abandoned island to kill each other. What brings such a
bizarre idea to fruition includes civil unrest, teenage anxiety, and a
nation literally terrorized by their youth. It's set in Japan and though
it
is just a movie it still hit pretty close to reality due to current
problems
with Japanese youth. In fact, the film was poorly received by the
government
who feared that the release of the film would incite riots and other such
acts of mayhem by the same youth which it focused on. The problem is the
same the world around. Young people are much more volatile than they ever
were say 20-30 years ago and Battle Royale captures the essence of the
horror that today's youth would face going into such a circumstance.
Friends
kill other friends and bullies all to survive. At the same time they get
to
live out those videogames that they loved to play at home.

[SIDE NOTE: Counter-Strike, a Half-Life (popular videogame) mod for
example,
easily prepares young people for the reality of weapons. How many bullets
are in a clip of an MP5? What does an assault rifle sound like? Questions
like these are easily answered by the videogames of today. Sure, these
weapons are also on the streets and in some parts of the world they are
even
in the hands of children as young as five years-old but the videogame set
up
creates a comfortable experience with such weapons. It's not that
videogames
necessarily make people want to get guns rather it gives familiarity to
guns. I should mention that I love to play Counter-Strike myself and will
continue to play it in the future. I don't hate the game, I'm just
pointing
out that it does present a fairly realistic portrayal of weapons.]

The problem is that there can be only one survivor of this island
massacre,
this only adds extra pressure to the already unprepared children who have
to
fight for their lives. What is truly shocking is that the actors and
actresses who have been selected to portray these teens are around the
same
ages of their characters. They aren't the aging 20-30 somethings that just
happen to look young; they are literally teenagers. This flick has some
serious bite! It's such a great comment on how we are living in the 21st
century in a time when frequently the fear for a country comes from within
rather than outside forces.

Certainly, terrorism is at the forefront of the average North American's
mind due to the World Trade Center attacks and CNN's endless coverage of
the
horrors of said event have easily made the problem an international event.
But before that the biggest headline grabbers focused on young people,
filled with `rage', unleashing their anger on their helpless peers using
an
array of weapons (mainly guns). School shootings shocked the world when
children started killing their peers.

Battle Royale is not meant to trivialize school shootings and youth
violence. Rather, it's an examination of the lengths which a government
will
go in order to discipline the youth. It's such a ludicrous idea. But the
characters stay true to form as they profess long held crushes with their
dying breath all the way down to naively trusting others who they've
always
admired as the popular kids. It's sick. Strange. Beautiful. Familiar.
Different. And completely engaging. Most people are against the film
because
they feel that the plot is simply silly or because the dialogue is too
hammy
or some such nonsense. At the same time, those naysayers will praise films
like Braveheart for its honest portrayal of Scotland's only historical
hero.
I loved Braveheart. I thought it was great too but it's bogus, for the
most
part. Certain battles and events really did happen. But William Wallace
was
no man to look up to. He raped and killed women and small children but
none
of that made it into the film because it was not that kind of "feel good"
thing that would sell Wallace as a hero. Battle Royale, since it draws on
fictitious characters and plot is far more interesting because it really
makes you think about your own life. Could you kill your best friend from
high school if the two of you are stuck on an island of death? To this day
I
refuse to answer that question. It sickens me to think of such a thing and
so I felt disturbed by what those 42 kids had to do in Battle Royale.
What's
even worse is that they were picked by lottery to end up on the island. In
the Japan that exists in Battle Royale, each year a random high school
class
is picked for the event. We are led to believe that all youth in Japan are
bad seeds in this film but that really doesn't seem to apply to the class
which the film follows. For all intents and purposes, they were innocent.
The dialogue between characters is poignant, real, and totally innocent.
You
can literally see how limited their vocabulary and understanding of the
world around them is. Furthermore, as I mentioned earlier, some of the
characters even profess love for their classmates without even knowing
what
love is all about. High school is a weird time for anybody. It's an
awkward
time that is all about experience and misunderstandings. So many people
AFTER high school really learn the truth about who liked them and what
people really thought of them. During high school there's always some
social
wall that stops any REAL open communication between two people. Being on
the
island forces unchecked emotions and feelings to flow out of the
characters
because death is on the horizon. Can you really label the dialogue as
lousy
in those circumstances?

Obviously, there are intelligent and well-organized people in the world.
Some exist in high school but for the most part teenagers are brash,
foolish, and irresponsibly reckless because they've yet to learn from
experience. They rarely have any experience. Teenagers put on an island to
kill themselves will certainly not learn anything new and if they do it
won't matter considering that they'll soon be dead.

Naturally, some go insane and mutter those math equations that their
teachers promised them would be valuable in the real world. Others feel
the
need to fulfill their sexual desires, who wants to die as a virgin, right?
Still others try to make the best of the situation by spending their last
few hours alive as civilized as possible. But the purpose of the game
affects all of these teenagers. They have to hurry. If the battle isn't
finished in 3 days they all must die which is easy for the people in
charge
who have low-jacked each teenager with collars that explode. Not enough to
take the head clean off, by default, but rather just enough of an
explosion
to open up the jugular. They bleed out until they die.their hopes and
dreams
for the future go with them. This is a grisly film that doesn't
specifically
cater to gore hounds. Certainly there are some really disturbing death
scenes and moments but nothing TOO over the top. The idea is shocking
enough, there's no need to be excessive. At first this fact upset me. I
wanted this film to be a bloody parade of carnage because I reasoned that
it's just a movie. Just some form of entertainment that existed to please
me. But the whole idea is sickening and compelling enough to satisfy on
more
layers than just the visual.

In the end, this is not a film for just anyone off the street. There are
so
many sceptics and people who are unable to maturely grasp the concept of
the
film. These are the people that really hate it and you can't really blame
them. For too long, Hollywood has been the dominant authority on
filmmaking
in the world. What was once a greatly expressive and thought-provoking
medium has now simply become a trite and boring thing. Everything is
recycled over and over. It's repackaged, re-sold, re-distributed to the
point that people can hardly accept something new and radical and
different.
If it's not safe, generic, or commercial than the reason for a film's
existence appears to be highly questionable. Battle Royale isn't going to
change the world. I wish it could but the damage has already been done and
now there is no place for a film that challenges socio-political norms or
has subtitles. But that's alright. Films that matter are still being made
even if they don't get the same amount of press or attention that the next
Leonardo DiCaprio movie will get. If you enjoy Battle Royale then Kinji
Fukasaku, who directed and adapted the film for the screen along with his
son Kenta, will be able to rest in peace. The man died on January 12th,
2003. He was 72 years-old and all he wanted to do was make movies until he
died. He got his wish.

"Don't Hate Yourself…
because no matter how hard you
try there's always someone that does it
better."
– J.Symister 2002