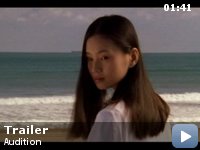 A widower takes an offer to screen girls at a special audition, arranged for him by a friend to find him a new wife. The one he fancies is not who she appears to be after all.

Storyline
A lonely Japanese widower whose son is planning to move out of the house soon expresses his sadness to a friend and fellow film producer, who becomes inspired to hold an audition for a non-existent film so that the widower can select a new potential bride from the resulting audition pool. The widower ultimately becomes enamored with and fascinated by one particular young woman…but first impressions can often be horribly wrong….

Asami as a child

Taglines:
She always gets a part

When the film was screened at the Rotterdam Film Festival 2000 it had a record number of walkouts. At the Swiss premiere someone passed out and needed emergency room attention.

Continuity:
During their weekend getaway, Asami clearly removes all of her clothing then lies in bed and covers with a sheet. She then raises the sheet to expose the wounds on her thigh. The white panties can clearly be seen despite the fact that she just removed them.

Asami Yamazaki:
This wire can cut flesh and bones easily.

Old man in wheelchair:
You're wonderful.

Asami Yamazaki:
I never felt unhappy… Because I have been unhappy all the time.

Takashi Miike's "Audition" has to be one of the best Japanese horror movies
I have ever seen.Ryo Ishibashi plays Shigeharu Aoyama,a lonely middle-aged
man.After many years of being loyal to his deceased wife is the right time
to begin dating again.His friend Yasuhisa decides to set up a fake casting
audition in hopes that his friend can find new wife.Aoyama then goes through
countless portfolio's looking for women to audition,but as soon as he sees
the beautiful Asami's picture he knows that she is the one.Soon they begin
dating.Everything seems perfect at first,but is Asami all that she
seems?"Audition" isn't as violent and outrageous as "Fudoh" or "Ichi the
Killer",but it certainly delivers some of the most harrowing scenes of
violence ever captured on screen.The film is atmospheric and artistic,so if
you're looking only for gore and violence avoid this one like the
plague.However if you're a fan of Miike's works this masterpiece is not to
be missed.10 out of 10.