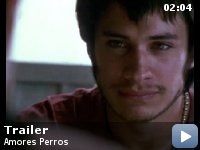 A horrific car accident connects three stories, each involving characters dealing with loss, regret, and life's harsh realities, all in the name of love.

Storyline
Three interconnected stories about the different strata of life in Mexico City all resolve with a fatal car accident. Octavio is trying to raise enough money to run away with his sister-in-law, and decides to enter his dog Cofi into the world of dogfighting. After a dogfight goes bad, Octavio flees in his car, running a red light and causing the accident. Daniel and Valeria's new-found bliss is prematurely ended when she loses her leg in the accident. El Chivo is a homeless man who cares for stray dogs and is there to witness the collision.

El Chivo (Emilio Echevarría) shouts at Luis (Jorge Salinas) "You are so clever! You must be a publicist," during the kidnapping scene. Salinas played a publicist in
Sex, Shame & Tears.

Continuity:
when El Chivo is pushing his cart through the streets prior to the crash, he is alternately wearing a grey t-shirt or a Fairisle-type sweater under his jacket.

Susana:
[to Octavio]
You and your plans. You know what my grandmother used to say? If you want to make God laugh… tell Him your plans.

There is a character in 'Amores perros' who looks like Karl Marx. He is a
tramp and an assassin, a good bourgeois who one day, Reggie Perrin-like,
abandoned his family, and, un-Reggie Perrin-like, joined the Sandanistas in
an effort to create a better world, earning 20 years in prison for his
troubles. Walking the streets with a creaky cart and a gaggle of mangy
dogs, he was found by the policeman who jailed him, who gave him a dingy
place to live, food, and the odd, non-official contract.


El Chivo is the soul of the film, the missing link, both in appearance (a
man called 'The Goat', who has rejected the civilities of society and lives
a beast-like existence with his dogs, amongst the ruins of civilisation),
and narrative function. With intricate structure, 'Amores perros' tells
three stories, one of underclass Mexican life, where survival depends on
what New Labour calls 'illegal economies' (dog-fighting, bank-robbing
etc.),
where bright young women are stifled and degraded by thoughtless
pregnancies
and brutal marriages, where single mothers depend (and usually can't
depend)
on shiftless sons for subsistence; and this world's mirror opposite, the
world of the media, of celebrity, of models and magazine editors, of
daytime
TV, perfume advertising campaigns and bright apartments. Family life is
central here too, although in this case it is torn apart by more
pleasanntly
bourgeois ailments like ennui and dissatisfaction.

These two stories are mediated by the narrative of El Chivo, the man who
left one of these worlds for the other, but who still negotiates the two,
through his search for the daughter he left as a toddler, and in his 'job',
wiping out businessman. If Mexico is emerging as part of the
super-confident globalism of high-capitalism, than El Chivo is the grizzly
sore thumb, the ex-Sandinista, the Marx lookalike, the man who said no, the
drop-out, the forgotten, the depleted spirit of the Left, happily killing
and torturing the servants of the new economic regime.

There is something Biblical about his hirsute ascetism too, presuming to
judge the 'Cain and Abel' half-brothers, one an adulterer, the other with a
contract out on his sibling, another example of family gone badly wrong.
This, the bleak funeral and grave scenes, and Octavia's functional crossing
himself every time he passes an icon on the landing, are the sole residual
elements of religion in a society once ostentatiously religious.

Except for the director. Like Paul Thomas Anderson in 'Magnolia', although
to a less self-conscious degree, Gonzales Inarritu is the God of his film,
intricately creating the structure that links his characters and their
different environments. These are negative connections, however, which
work
against the idea of coherent meaning in life – contact usually results in
destruction (physical, material, spiritual), or diminishing.

He is also an Old Testament god, punishing those who would get too
confident
with their future plans or their seemingly inviolable present success – the
gains of capitalism are prey to the violent whims of chance: Gonzalez
Inarritu doesn't need frogs to shake a rigid society or mindset.

Moral change is linked to physical change – being beaten up, losing a leg,
cutting hair. The punning title, with its reference to the
dog-eat/fight-dog nature of modern life, and its general
unsatisfactoriness,
also gives the film its Biblical feel, the idea of Mexico as an asphalt
desert, or a rubbish heap, with all these scrawny mutts scavenging the
remains.

'Amores perros' shares the sickly, bleached near-monochrome look of many
recent crime films, like 'Chopper' or 'Bleeder'. But where the heightened
mise-en-scene in those works were expressionistic projections of their
protagonists' psychosis, here it's part of a controlling world-view, the
universal consciousness that creates, connects and destroys.

The three stories, though connected narratively and symbolically, are
mutually distinct – the first is an exhilirating mix of violent gangster
film and frustrated romance; the second is like a short story (the
screenwriter is a novelist), a figurative plot where movement is through
image, symbol and idea, rather than film narrative; the third is a kind of
spiritual journey, with an appropriately Biblical (or Wim Wenders-like)
openness.

'Amores perros' is not quite as amazing as its admirers claim – it says
more
about contemporary cinema that a film only has to hold your interest for it
to be a masterpiece – but it is consistently enthralling, and, despite all
the stylistic tics and brutal violence, bracingly humanist.

TagsMexico
The Crow: Salvation
Me, Myself & Irene