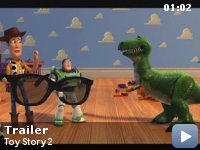 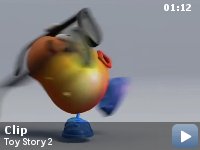 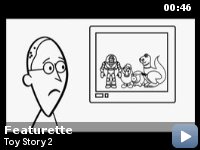 When Woody is stolen by a toy collector, Buzz and his friends vow to rescue him, but Woody finds the idea of immortality in a museum tempting.

Storyline
While Andy is away at summer camp Woody has been toynapped by Al McWiggin, a greedy collector and proprietor of "Al's Toy Barn"! In this all-out rescue mission, Buzz and his friends Mr. Potato Head, Slinky Dog, Rex and Hamm springs into action to rescue Woody from winding up as a museum piece. They must find a way to save him before he gets sold in Japan forever and they'll never see him again!

Taglines:
The Toys are Back in Town

The enormous amount of Sheriff Woody merchandise is a reference to the similarly themed Disney merchandizing phenomenon, Davy Crockett, from the 1950s.

Revealing mistakes:
When Buzz and the gang are scanning the TV to look for Al's Toy Barn commercial, reflection of the desk and the room is noticeable on the TV screen, but not any of the toys, even though they are standing on the desk, in front of the TV.

Buzz Lightyear:
[landing on Zurg's planet]
Buzz Lightyear to mission log: All signs point to this planet as location of Zurg's fortress, but there seems to be no signs of intelligent life anywhere…

Much more than a kid's movie

The first Toy Story was largely confined to little Andy's room and his
dreaded neighbor's house. When we pick up the story in "Toy Story 2,"
Buzz
Lightyear is in outer space where he meets his arch-nemesis, Emperor Zurg.
In a cheeky opening, the rules devised by Lasseter and his Pixar staff are
laid out: There are no rules.


Buzz flies through caverns, enters Zurg's stronghold, and gets defeated
(gasp) by the evil Zurg! Is this the end of our hero?….Nah, it's just
Rex
playing the Buzz Lightyear video game and losing. It is Yard Sale Day and
the toys are understandably tense. You see, Yard Sale Day means that the
old toys go out to the sale. Woody has reason to be nervous, he's
starting
to show his age. He's got a ripped arm thanks to Andy's dog, whom we got
introduced to at the end of the first Toy Story. Sure enough, one of the
toy troop gets taken. Poor Weezie the Penguin was laid forgotten on Andy's
bookcase and he promptly gets put in the sale box. It's up to Woody to
save
him, which he does. But he gets picked up by a greedy toy-collector named
Al and taken to Al's Toy Barn. Seems Woody is pretty valuable and Al
wants
to sell him to a toy auction. Can Buzz and friends save him in
time?

Ho-hum, sounds like a harmless little kid's movie, doesn't it? But
remember
Lassetter and the rules, or lack thereof? Well, things take quite a
poignant turn.

In a magical sequence that's an homage to Howdy-Doody, Woody learns that
he
was part of an old 1950s children's puppet show along with some other toys
from the show, the salty Prospector Pete (Kelsey Grammar), Jessie the
Yodelling Cowgirl (played brilliantly by Joan Cusack), and Woody's
faithful
steed. As Pete tells Woody, toy collecting means immortality. Woody and
his new friends will be preserved in cases for admiring eyes to faun over.
Woody's days with Andy are numbered. This point is further emphasized by
a
heartbreaking song sung by Sarah Maclachlan that tells the story of how
Jessie's owner abandoned her because, well, she grew up. Pete says, "Do
you
really think Andy will take you to his high school graduation or to
college?" Talk about a bind. Does Woody go back to Andy and have
fleeting
fun or stay preserved in predictable permanence?

Meanwhile, Andy's gang have their own awakenings to paths not taken. Mr.
Potato Head sees temptation incarnate in some friendly Barbies ("I'm a
married spud! I'm a married spud!") and Buzz comes face to face with a
new
Buzz Lightyear figure….who turns out to be as self-delusional as he was.
You mean, they're all like this?! And the knockout punch: Buzz faces his
mortal foe, Emperor Zurg and confronts a shattering secret. Hint: Think
"Star Wars."

Pixar has come a long way since the first "Toy Story." The computer
animation is absolutely amazing as the toys have much more dimension and
realism in the details than the original. Once again everyone is
terrific,
especially Cusack who injects soul in the spunky and slighted Jessie.
References abound, from "2001" to "Star Wars." Plus some inside jokes
concerning Toy Story's lack of merchandise production also make their way.
Even a sly suggestive joke or two slips in. Hint: Watch Buzz's wings at
the end.

I cannot say enough about one sequence in particular with Buzz and the
gang
crossing the street. Lasseter directs this scene with great skill and
comic
placement. I was in tears at this point, and this was a "kid's"
movie!

But, as with the first one, what really got me engaged was the story, as
affecting a story as I have seen live or animated. If I can make an
outlandish statement, Toy Story seems to be reaching for something akin to
the "Star Wars Trilogy" or even the "Godfather Trilogy." Not so much for
epicness, but for how the story gets deeper and richer as it goes along.
"Star Wars" was an entertaining space opera, "Empire Strikes Back" was a
mythic, dark, operatic chapter in a saga. "Godfather" was an exciting and
classically-influenced masterwork, "Godfather Part II" was a quiet, dark,
character study that reveals Michael's moral bankruptcy and the decline of
the Corleone empire.

Lasseter's plan intrigues me. With "Toy Story", the plot revolved around
a
buddy picture that showed the bond between an old toy and new toy, and
that
being a toy is the best thing in the world. This bittersweet second
chapter
addresses what happens after the toys aren't needed anymore. What happens
now? Where will I go? Will I be loved again? I wonder if with the
third,
if there is one, we'll see what makes a toy timeless. What separates a
Woody or Buzz from Rex the Dinosaur or Slinky the Dog? And I wonder what
the ultimate fate of our friends actually is. I'm hoping they get passed
on
to Andy's children and his grandchildren, throughout all the generations.
I
wouldn't worry about Buzz and Woody, though. They're already timeless.