The World Is Not Enough 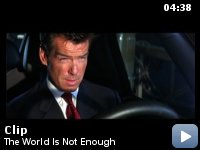 James Bond uncovers a nuclear plot when he protects an oil heiress from her former kidnapper, an international terrorist who can't feel pain.

Storyline
James Bond is back. An oil tycoon is murdered in MI6 and Bond is sent to protect his daughter. Renard, who has a bullet lodged in his brain from a previous agent, is secretly planning the destruction of a pipeline. Bond gains a hand from a research scientist, Dr. Christmas Jones who witnesses the action which happens when Bond meets up with Renard, but Bond becomes suspicious about Elektra King, especially when Bond's boss, M goes missing. Bond must work quickly to prevent Renard from destroying Europe.

Taglines:
Bond is Back

The first Bond film to be shot in Pinewood Studios since
The Living Daylights.

Audio/visual unsynchronized:
While in the caviar factory, Bond fires his P99 at the Renard goons, and the slide of the gun can be seen going back three times, but we hear only two shots.

Lachaise:
So good of you to come see me, Mr Bond, particularly on such short notice.

James Bond:
If you can't trust a Swiss banker, then what's the world come to?

So underrated and unappreciated…

In November of 1999, a very strange thing happened. An intelligent action
film filled with well-drawn characters, an unconventional plot structure,
and a storyline that required you to pay attention. Stranger still, it
was
a James Bond film, a series widely regarded by the mass public as `fluff'
when Bond films have actually been among the prime example of properly
done
plot-motivated action pieces. The highly underrated `The Living
Daylights'
comes to mind.


But the strangest thing is the critical thrashing `The World Is Not
Enough'
received. From Entertainment Weekly singling it out as a reason to
overhaul
the Bond franchise, to Internet critics (cough Harry Knowles cough)
soundly
trashing it in long, diatribe-filled electronic pieces. The fact that
Harry
praised the previous entry `Tomorrow Never Dies' (or as a friend described
it, 12 pages of script and 90 pages of storyboards) as the best entry
since
`The Spy Who Loved Me' only leads to my conclusion that the critics and
movie-goers of today have firmly and finally `checked their brains at the
door' so to speak.

The range of critiques for TWINE is stunning. I have read dismissals of
the
first fifteen minutes as nothing more than one action sequence after
another, despite the fact that the opening teaser has direct relevance to
the storyline and contains more complex plot structure than the
aforementioned previous entry, TND. Claims of it being `boring' and
`dull'
were often tossed about. Even the fact that Bond actually expresses
discomfort was singled out as a major flaw. See my above `brain-checking'
comment. But I am not here to make TWINE look good exclusively in
comparison to TND, so here goes.

TWINE had me from the start, from Bond's instant realization of the money
bomb. I knew I was in good hands from that point on. Indeed, in an era
of
clumsily handled twists and blindingly obvious revelations, the Electra
King
twist completely threw me. I had my suspicions, just as James himself
wisely did, but I didn't want to believe it. Again, just like James. I
could go on for a good half-hour about M's shock when she sees exactly
what
she and MI6 have created in 007. His cold-bloodedness has never been on
bigger display in recent ventures, save a few select moments. (`For
England
James? No. For Me.') Make no mistake about it. Bond is first and
foremost a trained killer in this outing, firmly focused on carrying out
the
will of MI6, even at the cost of.

The action sequences serve the story for a change, and each carry
emotional
weight, resulting from character's needs beyond that of eliminating Mister
Bond. Two of the primary sequences are ploys by the main villain, blatant
attempts to misdirect rather than outright kill for the sake of killing.
Indeed, misdirection and misreading motivations are the primary plot
movers.
By the end, everything believed by our antagonist neatly shifts into
reverse. And thankfully, the `one-man army' Bond of late is greatly
reduced
here, pitting Bond against more realistic odds.

The small moments count too. The high-backed chairs at the MI6 briefing.
Zukofsky's small moment of delight upon seeing Bond's new Beemer sliced in
half. The expertly placed shot toward Renard's head, blocked by safety
glass. Elektra's emotional breakdown when trapped inside the avalanche
(but
faked or not?) And Zukofsy's silent communication to Bond to take care of
business for him. Reverence and respect is held for the series' past,
even
Bond's marriage is referenced as he dodges Electra's query as to whether
he's ever lost someone that he loves. Heck, these days even a lone
`Universal Exports' reference would be considered gold, but the writers of
TWINE have obviously done their studying.

If TWINE has any weaknesses, the action sequences are not always staged at
the series' prime. Although the raid on Zukovsky's factory is executed
beautifully and is a superb set piece for Bond, some clumsy editing and
lensing weakens the ski sequence and the climactic fight on board the
Victor
II sub. David Arnold's score is under-mixed; giving the movie a bit too
much subtlety in moments the grandness should be spilling into the theater
(commercial or home). And of course, Denise Richards is just plainly
miscast for the part of Christmas Jones, which screams for someone of
greater maturity. As someone on the Internet said `Bond girls should have
class, not be late for it.' Can't argue much there.

In closing, I hope the producers choose to ignore the gnashing of
hypocritical teeth and continue on a similar path for the next Bond film.
Do not return to a one-set-piece-after-another film. Have faith (however
small) that the audience will wake up. I know I for one will be there,
hoping that the next film will live up to the lofty (if unappreciated)
standards of 'The World Is Not Enough'.

TagsEngland Europe UK
The Messenger: The Story of Joan of Arc
Toy Story 2