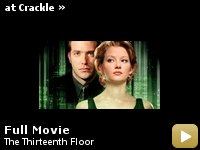 Computer scientist Hannon Fuller has discovered something extremely important. He's about to tell the discovery to his colleague…

Storyline
Computer scientist Hannon Fuller has discovered something extremely important. He's about to tell the discovery to his colleague, Douglas Hall, but knowing someone is after him, the old man leaves a letter in his computer generated parallel world that's just like the 30's with seemingly real people with real emotions. Fuller is murdered in our real world the same night, and his colleague is suspected. Douglas discovers a bloody shirt in his bathroom and he cannot recall what he was doing the night Fuller was murdered. He logs into the system in order to find the letter, but has to confront the unexpected. The truth is harsher than he could ever imagine…

Taglines:
Question reality. You can go there even though it doesn't exist.

The science fiction novel Simulacron-3 was also published under the title Counterfeit World, it was first published in 1964 by Daniel F. Galouye in the United States, and is one of the first literary descriptions of virtual reality.

Continuity:
Tom Jones's cigarette jumps from his left hand to his right hand when he says, "Like the singer."

Hannon Fuller:
[First lines]
Ignorance is bliss. For the first time in my life, I agree.


This movie was both critically and financially panned. Why?

The Thirteenth Floor is a good movie. No, it's not "The Matrix" all
over again, but it wasn't trying to be. Comparing these two movies is
like comparing Star Trek with Star Wars. Similar in aspects, but very
different in others.

This is what happens when two movies of similar type are released in
close proximity. The first one always has a jump-start on the second by
means of box office success and pleasant reviews. That's why I think
"The Thirteenth Floor" was branded as a bad movie. People had already
seen "The Matrix" with it's knock-out special effects, cast and weren't
open-minded for a movie on the same genre branch. So The 13th Floor was
said to be 'a bland, pale imitation of the Matrix'.

Maybe "The Thirteenth Floor" doesn't have a star-studded cast – yes,
it's cast is mostly regular supporting players, but they work well with
the material. So there's no kung-fu ass kicking scenes, so what!

There's great atmosphere, a intriguing story and a real nice plot
twist. To me that makes up a very fine movie. So I ask what was so very
wrong with "The Thirteenth Floor" that made critics turn away and made
it tank at the box office? Really it's people's unwillingness to give a
similar movie a chance and instead opting to take the easy route and
branding it as a "rip-off". Which is their loss unfortunately.