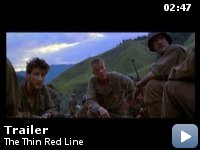 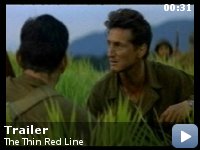 Director Terrence Malick's adaptation of James Jones' autobiographical 1962 novel, focusing on the conflict at Guadalcanal during the second World War.

Storyline
In World War II, the outcome of the battle of Guadalcanal will strongly influence the Japanese's advance into the pacific. A group of young soldiers is brought in as a relief for the battle-weary Marine units. The exhausting fight for a key-positioned airfield that allows control over a 1000-mile radius puts the men of the Army Rifle company C-for-Charlie through hell. The horrors of war forms the soldiers into a tight-knit group, their emotions develop into bonds of love and even family. The reasons for this war get further away as the world for the men gets smaller and smaller until their fighting is for mere survival and the life of the other men with them.

Taglines:
Every man fights his own war.

Several lines of dialogue are sampled in the song "Eye for an Eye" by UNKLE.

Anachronisms:
There is a modern, fiberglass and foam surfboard on the beach.

Private Edward P. Train:
What's this war in the heart of nature? Why does nature vie with itself? The land contend with the sea? Is there an avenging power in nature? Not one power, but two?

Every movie-goer sees his own film…

Having taken the time to read scores of reviews for TTRL (including IMDb
ones here), I'm reminded of the movie subscript for this most
controversial
film: "Every man fights his own war." What a polarization exists amongst
its viewers, and a lot of emotion both ways.

I was stunned, moved, transfixed and totally absorbed by this film, even
more so on subsequent viewings. I was one of the considerable number of
people who, as the credits appear, sit quietly till one has to leave —
still stuck in the film's experience. I'm not angry at others who merely
fell asleep. It's odd how some of the film's harsher critics seem
compelled
to vent their anger in disparaging comments against those who loved it —
most of those who liked the film were gentler in commenting on its
critics.

In contrast to what some have written, "The thin red line" has nothing to
do
with the British infantry in its imperial past. Jones referred to two
related quotes in his excellent book, both having to do with a thin line
between sanity and insanity. Whether "justified" or not, necessary or
not,
there is a lot of insanity in the war experience by anyone's definition of
insanity.

War exists and seems to recreate itself — I never got the idea from
Malick's film that he was preaching that we should just stop having wars.
On the contrary, he takes war as a given in the human part of nature, and
shows how individual human beings variously adapted (or mal-adapted!) in
order to be able to keep eating, breathing and, yes, killing. The war
experience is not primarily about shooting and blowing things up — as
Jones
described from his own experience, it's largely about what happens between
skirmishes — strife and comradeship, fear and bravado, homesickness and
freedom from past constraints, and waiting to die or to see a buddy die.
People came, died, and were replaced — much as portrayed by the cameo
appearances in the film that confused or upset some viewers. Veterans
always talk about how hard it is when you have to rely on your buddies
(and
feel for them) even though odds are most of them will die.

What is most important to me (and it doesn't have to be for anyone else, I
know that) is how the eternal themes of humanity are affected and
expressed
in such circumstances. All great works of art have something to do with
the
themes of beauty, pain, triumph, despair, good and evil. There's nothing
wrong with entertainment as a diversion (The Matrix was fine fun); there's
room both for film for fun and for film as art. Saving Ryan's Privates
was
mostly good entertainment (although I found it terribly manipulative and
jingoistic), while TTRL explores the themes I mentioned above, never with
easy answers. If you found the voice-overs heavy-handed, maybe it's
because
you're used to Hollywood telling us what to think and feel and thought
Malick was doing the same. Watch again and see if he's not just giving us
access to various individuals' often conflicting perspectives.

As for those who think the film portrays "our soldiers" in a bad light, my
family members who fought in WWII described their experiences and their
reactions much as those shown in TTRL — they were ordinary men, decent
enough people, not heroes though sometimes unpredictably capable of the
heroic, and devastated by their experiences. I'm proud of them for having
done all they could to do what they felt was their responsibility, and to
keep some humanity intact in spite of the horror. None of them told me
they
felt "ennobled" by war; they endured it and were badly hurt by it but
didn't
feel sorry for themselves, either.

In TTRL I got to see this portrayed with such compassion I wept. Even the
guy (Dale) who ripped gold teeth out of the mouths of dying Japanese
soldiers was no stereotypical villain — he has his moment of grace as do
they all. No one's defenses are portrayed as impregnable, not even
Witt's.
No stereotype himself, we see him kill over a dozen soldiers in battle,
while still trying to see God in the midst of the chaos.
And what a powerful scene at his life's end, fulfilling his own striving
for
self-sacrifice, and recognizing in a moment of epiphany where his own
immortality lie. Those who couldn't find a plot line in the film must
have
missed the first ten minutes…

Maybe it's because of my own experience in life that I respond to this
film
so strongly. I endured and survived ten years of intense, inescapable
unrelenting abuse as a child. I remember even as a small child trying to
make sense of it all — looking for the good, the reasons, God's plan, my
purpose. Others who've survived trauma (in the Holocaust camps, on the
cancer wards) often describe how such experiences focussed their attention
on things that matter, beyond the physical realities they could not
control.
Ever since my childhood I've moved through life with a second
awareness —
that examination and self-examination while "real time" goes on.

That's what Malick portrayed, for me, in this film. Maybe you think
that's
"sophomoric" or "pretentious". It may not seem so when you're in the
midst
of a struggle, or on your death bed…

P. S. I organized a special screening of this film locally for a few
friends — 400 others paid to come, by word of mouth. Over a hundred sat
spell-bound as the credits scrolled by — hushed and not wanting to leave.
Fellow wounded souls, some of them, I'll bet.