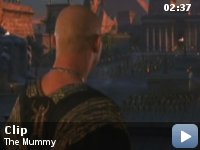 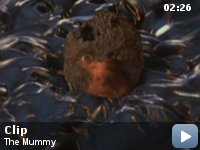 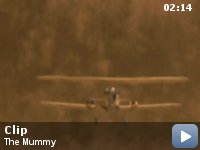 An American serving in the French Foreign Legion on an archaeological dig at the ancient city of Hamunaptra accidentally awakens a Mummy.

Storyline
An English librarian called Evelyn Carnahan becomes interested in starting an archaeological dig at the ancient city of Hamunaptra. She gains the help of Rick O'Connell, after saving him from his death. What Evelyn, her brother Jonathan and Rick are unaware of is that another group of explorers are interested in the same dig. Unfortunately for everyone, this group ends up unleashing a curse which been laid on the dead High Priest Imhotep. Now 'The Mummy' is awake and it's going to take a lot more than guns to send him back from where he came from.

The opening voice-over was originally intended to be read by Imhotep. Director Stephen Sommers later realized that Imhotep wouldn't be able to speak English, and gave the voice-over to Ardath Bey instead.

Errors made by characters (possibly deliberate errors by the filmmakers):
After Jonathan was able to steal the key of the book of Amun-Ra with Evelyn, he opens the book and reads the hieroglyphics upside down.

Ardeth Bay:
[narrating]
Thebes, City of the Living. Crown jewel of Pharaoh Seti the First. Home of Imhotep, Pharaoh's high priest, keeper of the dead. Birthplace of Anck Su Namun, Pharaoh's mistress. No other man was allowed to touch her. But for their love, they were willing to risk life itself.

Here, the makers took the original stock horror film and turned it into an
Indianajonesesque adventure in the tradition of Raiders of the Lost Ark.
The
most visually rich part of the film was the opening scenes set in ancient
Egypt. I would love to see an entire film built around that. The sets and
costumes were brilliant.


Especially tantalizing is the strictly painted-on attire of Patricia
Velazquez as Anck-Su-Namum; what a stunning visual; but it completely
upstages her performance. I have heard people talking about it. Some have
mistakenly guessed her top was a mesh costume of some sort; not true, it
is
entirely – and only – paint.

But Velazquez isn't the only thing to turn heads in the film, Rachel Weisz
is appropriately attractive, though not as startling; her character is as
solid and believable as she is lovely.

The newcomer, Oded Fehr as Ardeth Bey, set quite a few female hearts
aflutter; in our party, at least. The internet was lit-up searching for
more
photos of this guy.

At first, I didn't particularly care for Brendan Fraser as the primary
character (he's too well kept and cutesy for a rugged guy-type for me), be
he grows on you. He seems to be developing into a versatile actor who will
be around for a long time. His work here is good too.

The special effects were the real star of the film, and they were visually
rewarding and complimented the story in the right way in the right places.
How Arnold Vosloo dealt with those in his role as the mummy Imhotep should
be acknowledged. He must have had to imagine quite a bit of what he was
interacting with to pull it off, and he does so with great style and
substance for this type of role. He was nothing short of
excellent.

In fact, most of the remaining characters were well chosen. Jonathan Hyde
and Kevin J. O'Connor added to the film in important ways, too. Together,
everyone painted an enjoyable film, delivering exactly what it promised;
fun, action, and adventure.