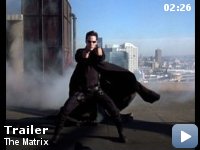 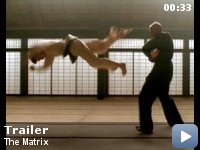 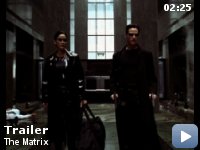 A computer hacker learns from mysterious rebels about the true nature of his reality and his role in the war against its controllers.

Storyline
Thomas A. Anderson is a man living two lives. By day he is an average computer programmer and by night a hacker known as Neo. Neo has always questioned his reality, but the truth is far beyond his imagination. Neo finds himself targeted by the police when he is contacted by Morpheus, a legendary computer hacker branded a terrorist by the government. Morpheus awakens Neo to the real world, a ravaged wasteland where most of humanity have been captured by a race of machines that live off of the humans' body heat and electrochemical energy and who imprison their minds within an artificial reality known as the Matrix. As a rebel against the machines, Neo must return to the Matrix and confront the agents: super-powerful computer programs devoted to snuffing out Neo and the entire human rebellion.

Taglines:
The Matrix has you.

Nicolas Cage turned down the part of Neo because of family commitments. Other actors considered for the role included Tom Cruise and Leonardo DiCaprio.

Errors made by characters (possibly deliberate errors by the filmmakers):
The name of the software company Neo works at is spelled "METACORTEX" on the outside of the building, but a sign inside the building has it spelled "META CORTECHS". Featurettes suggest that the name was changed to avoid an expensive legal issue; evidently one of the signs was missed.

Trinity:
Is everything in place?

Cypher:
You weren't supposed to relieve me.

Trinity:
I know, but I felt like taking a shift.

Cypher:
We're gonna kill him. You understand that?

Trinity:
Morpheus believes he is the one.
[…]

The benchmark for all sci-fi films to come

The story of a reluctant Christ-like protagonist set against a baroque,
MTV
backdrop, The Matrix is the definitive hybrid of technical wizardry and
contextual excellence that should be the benchmark for all sci-fi films to
come.

Hollywood has had some problems combining form and matter in the sci-fi
genre. There have been a lot of visually stunning works but nobody cared
about the hero. (Or nobody simply cared about anything.) There a few,
though, which aroused interest and intellect but nobody 'ooh'-ed or
'aah'-ed
at the special effects. With The Matrix, both elements are perfectly en
sync. Not only did we want to cheer on the heroes to victory, we wanted
them to bludgeon the opposition. Not only did we sit in awe as Neo evaded
those bullets in limbo-rock fashion, we salivated.

But what makes The Matrix several cuts above the rest of the films in its
genre is that there are simply no loopholes. The script, written by the
Wachowski brothers is intelligent but carefully not geeky. The kung-fu
sequences were deftly shot — something even Bruce Lee would've been proud
of. The photography was breathtaking. (I bet if you had to cut every
frame
on the reel and had it developed and printed, every single frame would
stand
on its own.) And the acting? Maybe not the best Keanu Reeves but name me
an actor who has box-office appeal but could portray the uneasy and
vulnerable protagonist, Neo, to a T the way Reeves did. But, come to
think
of it, if you pit any actor beside Laurence Fishburne, you're bound to
confuse that actor for bad acting. As Morpheus, Mr. Fishburne is simply
wicked! Shades of his mentor-role in Higher Learning, nobody exudes that
aura of quiet intensity than Mr. Fishburne. His character, battle-scarred
but always composed Morpheus, is given an extra dose of mortality (He
loves
Neo to a fault.) only Mr. Fishburne can flesh out.

People will say what they want to say about how good The Matrix is but the
bottomline is this: finally there's a philosophical film that has cut
through this generation. My generation.
The Wachowski brothers probably scribbled a little P.S. note when they
finished the script saying: THINK FOR A MOMENT ABOUT YOUR EXISTENCE. What
is the Matrix, you ask? Something that's closer to reality than you
think.

Either that or it's my personal choice for best film of
all-time.

TagsAustralia Sydney
Forces of Nature
A Walk on the Moon