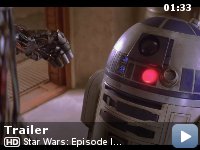 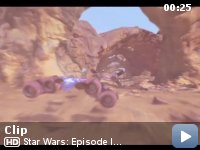 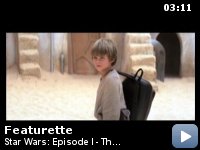 Two Jedi Knights uncover a wider conflict when they are sent as emissaries to the blockaded planet Naboo.

Storyline
The evil Trade Federation, led by Nute Gunray is planning to take over the peaceful world of Naboo. Jedi Knights Qui-Gon Jinn and Obi-Wan Kenobi are sent to confront the leaders. But not everything goes to plan. The two Jedi escape, and along with their new Gungan friend, Jar Jar Binks head to Naboo to warn Queen Amidala, but droids have already started to capture Naboo and the Queen is not safe there. Eventually, they land on Tatooine, where they become friends with a young boy known as Anakin Skywalker. Qui-Gon is curious about the boy, and sees a bright future for him. The group must now find a way of getting to Coruscant and to finally solve this trade dispute, but there is someone else hiding in the shadows. Are the Sith really extinct? Is the Queen who she really says she is? And what's so special about this young boy?

In the original trilogy, lightsaber activations and deactivations happened off-screen most of the time to prevent the "jumps" that would occur when the film was stopped to allow the "activated" lightsaber props to be substituted for the deactivated handles. This no longer poses a problem and every activation/deactivation occurs on-screen in
Star Wars: Episode I – The Phantom Menace.

Revealing mistakes:
After R2-D2 repairs the shield generator, there is a scene where Padme is cleaning up the droid and talking to Anakin. In the last shot of this scene, the film is reversed (mirror image) – evident from R2-D2's features.

Qui-Gon Jinn:
Tell them we wish to board at once.

Radiant VII captain:
[to communication device]
With all due respect, the ambassadors for the Supreme Chancellor wish to board immediately.

Nute Gunray:
[on view screen]
Yes, of course. As you know, our blockade is perfectly legal and we'd be happy to receive the ambassadors.

Too many "Yes Men" around George Lucas

Of course this movie had a ton of hype and what movie can live up to
all
of that….yada yada yada. Even allowing for that, this movie is somewhat
of
a dissapointment. This movie proves that it wasn't just special FX that
made
"Star Wars" fun to watch. It was as if George Lucas was so thrilled with
what he could do with CGI effects, he forgot what made the original
trilogy
so great, which is writing and characters. It's not a bad film but the
problems are many.


-Many people have forgiven this movie for being lackluster as they say "It
is only the first in another trilogy and it is just setting up everything
to
follow". WRONG WRONG WRONG, this film needed to be it's own movie first
and
foremost as the other three films were. It needed to have good characters
and a somewhat interesting story….it didn't.

-The conflict in this story revolves around a trade dispute and the fate
of
the planet Naboo. Was anybody really caring about this? The details of the
dispute are somewhat vague and what is revealed doesn't real generate
enough
interest for us to root for a particular side. The important conflict
regarding Darth Sideous and his rise is kept far far in the background. We
don't even know why Darth Maul hates the Jedi's so much….he just does.
Possibly Lucas wanted Darth Maul to be somewhat like Boba Fett (silent and
mysterious). It worked with Boba Fett because he was only a supporting
character, not a main villian. This film really has no clear villian. I
wish
somebody would have had the courage and just told Lucas that his basic
story
was lousy.

-Nobody looks particularly happy in this film. Qui-gon is really the only
character that can be related to and even he is rather distant. The queen
acts like a mannequin in much of her scenes (and looks like one to).
Obi-wan
Kenobi wanders through the entire movie to no avail and never says
anything
interesting. The characters never seem to talk about anything besides the
plot (unlike in the first film). C3PO and R2-D2 were pretty pointless.
The
Jedi council comes across as extremely cold and buracratic. And I will
never
understand WHY they wrote Annakin as a grade school kid in this film. He
should have been a teenager. His scenes with the queen were awkward. We're
not even going to discuss Jar Jar.

-The "midochlorians" thing seems to have just been tacked on. The humor
falls flat unless you are an extremely small child. Annakin destroys the
trade ship at the end and safves everyone, basically BY MISTAKE!!! ILM and
George Lucas seem to be so happy with their new CGI toys that they spent
95%
of their time perfecting them. Quite frankly I thought the FX in "Return
of
the Jedi" were sharper, more dimensional and less cartoonish. Nothing all
that memorable seems to happen here. This movie may never have been as
good
as the hype, but it could have easily been much better than this. I waited
so long for this film, yet the first time I saw this movie I was actually
bored in the middle of it.

There are good moments. The pod race was fun, as was the light sabre
battle
at the end. There are some very nice special effects throughout.

Hopefully Lucas just had writers block when he wrote this one. Maybe he
will
remember what made the other films so good in time for "Episode II".
Though
he seems to have botched the title of it already.