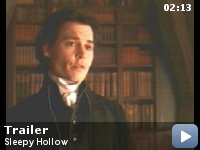 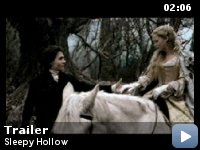 Ichabod Crane is sent to Sleepy Hollow to investigate the decapitations of 3 people with the culprit being the legendary apparition, the Headless Horseman.

Storyline
The curse of the headless horseman is the legacy of the small town of Sleepy Hollow. Spearheaded by the eager Constable Ichabod Crane and his new world ways into the quagmire of secrets and murder, secrets once laid to rest, best forgotten and now reawakened, and he too, holding a dark secret of a past once gone.

Star Johnny Depp adopted Goldeneye, the horse that played Gunpowder, Ichabod Crane's horse in the film, when he heard it was going to be put down.

Miscellaneous:
At the very start of the film Peter Van Garret (Martin Landau) in the carriage is looking forward in the direction of travel. He looks out of his left-hand window at a scarecrow. The camera tracks the scarecrow as the carriage goes past. The tracking shot is not correct. It is a tracking shot as filmed from the right hand side of the carriage, but Peter was looking out the left hand window.

Ichabod Crane:
Villainy wears many masks, none of which so dangerous as virtue…

Any reservations that I had about the film being be a turkey, were almost
immediately quelled upon seeing the movie. From the offset Mr. Depp throws
himself into the role of Icabod Crane with enthusiasm and gusto; portraying
excellently a man of "science" suddenly out of his depth in legend.
Christina Ricci also plays the role of Katrina van Tassel superbly; a sure
sign of good things to come from this talented young actress.


I would be reluctant to call this film an outright horror film – the special
effects are used primarily to enhance the plot and visual appearence, and
the gore level is low. The visual detail is a masterpiece – the sets are
fantastic and lighting brilliant. Tim Burton has superbly used music and
suspense to build the thrill in the film. However, the comical interjections
provide the required break-up of the suspense.

All in all a very well put together film, with solidly good acting, and most
of all a superb plot. Well worth seeing!

TagsEngland UK
The Messenger: The Story of Joan of Arc
Toy Story 2