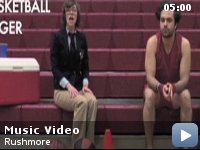 The king of Rushmore prep school is put on academic probation.

Storyline
Max Fischer is a precocious 15-year-old whose reason for living is his attendance at Rushmore, a private school where he's not doing well in any of his classes, but where he's the king of extracurricular activities – from being in the beekeeping society to writing and producing plays, there's very little after school he doesn't do. His life begins to change, however, when he finds out he's on academic probation, and when he stumbles into love with Miss Cross, a pretty teacher of the elementary school at Rushmore. Added to the mix is his friendship with Herman Blume, wealthy industrialist and father to boys who attend the school, and who also finds himself attracted to Miss Cross. Max's fate becomes inextricably tied to this odd love triangle, and how he sets about resolving it is the story in the film.

Taglines:
"She was my Rushmore"

The Bentley used in the film was used in exchange for the owner's daughter to appear in the film.

Crew or equipment visible:
When Max goes to meet Blume's wife, you can see the camera and crew reflected in the building behind them.

Student:
If, and only if, both sides of the numerator is divisible by the inverse of he square root of the two unassigned variable.

Student:
What about *that* problem?

School Professor:
Oh, that? Don't worry about that.

School Professor:
I just put that up as a joke. That's probably the hardest geometry equation in the world.

Student:
Well, how much extra credit is it worth?

School Professor:
Well, considering I've never seen anyone get it right, including my mentor Dr. Leaky at MIT, I guess if anyone here can solve that problem, I'd see to it that none of you ever have to open another math book again for the rest of your lives.

"Sic Transit Gloria Mundi": So the glory of this world fades


Rushmore was the first Wes Anderson film I saw, and I didn't think much
of it the first time. I used to think that Royal Tenenbaums was
Anderson's first good film. I thought Bottle Rocket wore its rookie
status on its sleeve; I thought Rushmore was flawed; and I thought
Tenenbaums finally showed that Anderson had honed his craft and he
would start making great films. I then re-watched Tenenbaums and found
it to be even more satisfying on additional viewings. I realized that
Anderson had actually crafted one of those rare pieces of cinema that
reveals itself more and more upon repeat viewings. So I of course
decided to give Rushmore a second look.


Now that I've had a chance to see the DVD, I've had a much different
experience viewing the film. Perhaps because I saw it on Pan and Scan
VHS previously? Or perhaps because Anderson's vision requires an
adjustment period?

Some people will never like Anderson's films. They simply will not
appeal to those out there who want clichéd Hollywood fodder. Some
people will love Anderson's films from the moment they see them.
Others, like myself, will need to see the films more than once to truly
appreciate them. Anderson breaks convention in ways no one has done
before – One has to understand that his films are deep where most films
are shallow, and shallow where most films are deep. This will throw A
LOT of people off, as evidenced by many of the comments on the message
boards. Anderson's films begin where others end. In Rushmore, we see
Max's fall from grace, not his climb up to become head of every club in
his school. In Tenenbaums, we see the aftermath of the child prodigies,
not their glory years. Again, this will throw a lot of people off, and
indeed I heard this criticism of Tenenbaums quite a lot. Anderson
constructs the world of his films around a cinema storybook. They are
episodic, told in chapters. Some will find Anderson at first glance to
be a rather egotistical filmmaker, as I once did. However, upon second
glance, you can begin to see the rich text woven deeper in the films
that might be hidden beneath quirkiness or drastic breaks from
convention. The first time I saw Rushmore, I felt shock, embarrassment
and confusion (Mostly at Max and Rosemary's bizarre interaction). I was
lost and unfamiliar with this world Anderson has created. The second
time I saw the film I felt Passion, Love, Tragedy and ultimate
Redemption. I found the heart in Anderson's film.

If you felt Rushmore was not all it could have been the first time you
saw it, please give it another chance. You'll find which side you fall
on.

TagsUSA
She's All That
Blast from the Past