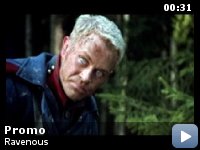 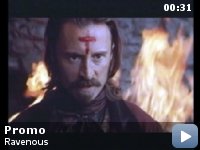 Captain John Boyd's promotion stations him at a fort where a rescued man tells a disturbing tale of cannibalism.

Storyline
Captain John Boyd receives a promotion after defeating the enemy command in a battle of the Mexican-American War, but because the general realizes it was an act of cowardice that got him there, he is given a backhanded promotion to Fort Spencer, where he is third in command. The others at the fort are two Indians, George and his sister, Martha, who came with the place, Chaplain Toffler, Reich, the soldier; Cleaves, a drugged-up cook; and Knox, who is frequently drunk. When a Scottish stranger named Colquhoun appears and recovers from frostbite almost instantly after being bathed, he tells a story about his party leader, Ives, eating members of the party to survive. As part of their duty, they must go up to the cave where this occurred to see if any have survived. Only Martha, Knox, and Cleaves stay behind. George warns that since Colquhoun admits to eating human flesh, he must be a Windigo, a ravenous cannibalistic creature.

According to Robert Carlyle's DVD commentary, vegetarian 'Guy Pearce' stoically underwent multiple takes of him eating the life-saving Knox stew (which was in fact a very nice lamb stew prepared by the film's caterers). Chomping into large chunks of meat and then spitting them out as soon as the director called 'cut'.

Revealing mistakes:
The sprung trap clearly wobbles when supposedly crushing its victims in a way no real trap would.

Pvt. Toffler:
He was licking me!

So Much More Than Cannibalism

If someone were to ask what Ravenous is all about, the easiest thing to say
would be: `It's about cannibalism in a remote Army outpost in the 1800s.'
That's exactly right, and that's probably what kept audience members away
from Ravenous when it briefly ran in theaters back in 1999. Cannibalism?
Who needs to watch that? Indeed.

Yes, there is cannibalism in Ravenous. Quite a lot of it, in fact. The
film is steeped in murder, the eating of human flesh, and is flavored with
madness. At times the film can be downright difficult to watch, though the
compelling nature of the narrative keeps the viewer's eyes locked on the
screen for the full ninety-eight minutes.

Ravenous is so much more than a meditation on people eating other people,
though it's obvious there was a great deal of confusion about how exactly to
present this dish to the public. Its plot is fairly simple for the first
half: Mexican War hero (and hidden coward) Lt. Boyd, played by LA
Confidential's Guy Pearce, is assigned to an end-of-the-Earth fortress in
the western Sierra Nevadas. This fort, populated over the winter by a tiny
handful of misfit officers and enlisted men, receives a visitor in the
person of a starving man with an awful story of a failed mountain crossing
that eclipses the Donner Party's. What happens then is so twisted, but
skillfully crafted, that it would be criminal to spoil what
transpires.

But Ravenous is not just a horror story. What lies at its heart is an
allegory about man's relationship to other men and how society structures
itself around the powerful and the powerless. Issues such as the morality
of Manifest Destiny and even the ethics of simple meat eating are touched
upon. Guy Pearce gives an underplayed performance so low-key that he almost
vanishes into the film stock, while co-star Robert Carlyle (most recently in
The World is Not Enough) plays opposite him with delightful nuance. The
material even brings deeply textured work out of Tim Burton stalwart Jeffrey
Jones as the commander of the fort, and scattered around these three are
solid supporting actors like Jeremy Davies, who's much better here than he
was in Saving Private Ryan, and David Arquette.

If anything works against Ravenous at all, it's the curious inclusion of
humor at the outset of the picture. Director Antonia Bird, who also made
Priest and Safe, is not known for her lighter side, which makes the
appearance of a goofy epigram at the very start of the picture, and the use
of some bizarrely inappropriate music during a later sequence, seem more
like some producer's half-hearted attempt to blunt the sharp edge of the
film's commentary with silliness.

Luckily for the viewer and the film, however, Ravenous is far too powerful a
motion picture to be undercut in this fashion. By the time the final reel
has passed, any memory of earlier missteps is forgotten as the pace grows
more deliberate and the action becomes bloodier and bloodier up until the
final moments.

Unjustly neglected on the screen, Ravenous is a film with a great deal to
say. It's only too bad that cannibalism was the best way to say it.