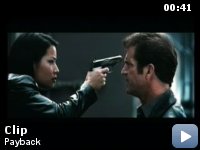 Porter is shot by his wife and best friend and is left to die. When he survives he plots revenge.

Storyline
Porter is bad, but his neighbours are worse. Street-wise and tough, an ex-marine, he is betrayed by a one-time partner, and shot in the back by his junkie wife. He survives and returns, looking to recover his share from the robbery of an Asian crime gang. The money has passed into the hands of "the Outfit", a slick gangster organisation that runs the city. He has to make his way through a world populated by heroin dealers, prostitutes, sado-masochists, gunmen and crooked cops, a place where torture is a way of life. His only friend is a former employer, a prostitute, and her loyalty is in question, given she now works for the Outfit. He makes good early progress, but then falls into the hands of Fairfax, the crime boss.

Taglines:
Get ready to cheer for the bad guy!

The bar where Val meets Stegman is called Varrick's. This is a reference to Walter Matthau's crime thriller
Charley Varrick, which was an influence on Payback.

Revealing mistakes:
Right before the Outfit's car blows up, the gas leaking out is bright green, as if it were antifreeze instead of gas.

Porter:
[voiceover]
GSW: that's what the hospitals call it: gunshot wound. Doctor has to report it to the police. That makes it hard for guys in my line to get what I call, quality health care.

How much is $70,000 worth to you? I'm sure that right now 70 grand would
come in real handy. But is it worth numerous beatings, getting shot, being
run over and having your toes mashed by a hammer? It is to
Porter.

I'm sure you're aware of the plot to this film (vengence, old flames and
mucho violence) but that barely scratches the surface of this brilliant
little noir. Whilst the story is basic the nuts and bolts used to make it
are complex, twisting and not quite what you expect. For a start there are
the characters. No good guys. Not one. Porter is a criminal. He's not even
a
particularly nice one. He's a killer, a thief, a thug, a gambler, a
cheater,
a liar and I bet he doesn't even pay his taxes. Likewise everybody else.
Sadists, murderers, corrupt cops, drug dealers, gang members, mobsters,
hookers. They're all here in their various shades of bad.

The success of this film relies on two people: Gibson and
screenwriter/director Brian Helgeland. With the lead gleefully playing
against his nice guy image Porter is as nasty as they come but still
retains
such charm and Gibsons trademark grin that not for one moment do you
dislike
him. He's cool in a way that Bruce Willis' Jackal never was. He quietly
slipped across continents with hi-tech equipment in various guises waiting
for his moment. Porter just walks into the hoods house with nothing but a
revolver and asks for his money back. A lot of the comments I've read say
that Porter is mean. He isn't. He'll just do what it takes to get his
money
back. He has nothing to loose so why not do it anyway. Porter is who Riggs
would be if he'd never met Murtaugh. Out of control, against massive odds
but just crazy enough not to give a damn.

Helgeland shows real talent as a director in his first time outing. As a
scriptwriter he's always been in the upper classes with a talent for
mixing
unrepentant violence with uneasy humour. Here he shows he can tell a damn
good story along with writing it. Nothing happens the way it's supposed
to.
We're used to good guys threatening to kill but always really bluffing.
Porter isn't. He'll ask for what he wants, he doesn't get it, BANG, you're
dead. People die at the wrong time too. Characters that are supposed to
last
until the end die in the middle while minors that only just arrive survive
only to get whacked by the finish anyway. The motivation is all wrong as
well. 70,000 is chump change to these people. The mobsters are wearing
suits
worth more than that. But Porter wants that and nothing more. He spends
most
of the film correcting people who think he's after more.

While based on the same source material as Point Blank, Payback is nothing
like it stylistically. The first used understated violence. Payback goes
for
the jugular and rips it out with copious amounts of rheseus negative. It's
hard to see this film working without this combo of star and director. If
you had, say Sylvester Stallone or Nicolas Cage and Richard Donner or Joel
Schumacher in charge you'd just have a bunch of nasty people doing nasty
things with none of the ghoulishly comic touches that make Porter cool. Be
thankful it's the combination it is and then go and see it. If you like
thrillers you'll love this.

TagsUSA
She's All That
Blast from the Past