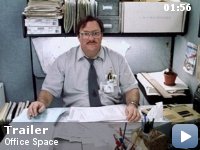 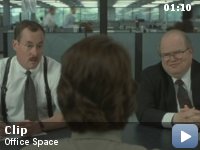 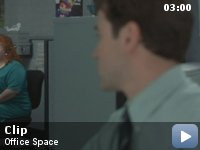 Comedic tale of company workers who hate their jobs and decide to rebel against their greedy boss.

Storyline
In the Initech office, the insecure Peter Gibbons hates his job and the abusive Division VP Bill Lunbergh that has just hired two consultants to downsize the company. His best friends are the software engineers Michael Bolton and Samir Nagheenanajar that also hate Initech, and his next door neighbor Lawrence. His girlfriend Annie is cheating on him but she convinces Peter to visit the hypnotherapist Dr. Swanson. Peter tells how miserable his life is and Dr. Swanson hypnotizes him and he goes into a state of ecstasy. However, Dr. Swanson dies immediately after giving the hypnotic suggestion to Peter. He dates the waitress Joanna and changes his attitude in the company, being promoted by the consultants. When he discovers that Michael and Samir will be fired, they decide to plant a virus in the account system to embezzle fraction of cents in each financial operation into Peter's account…

After the movie became a cult item, Mike Judge was offered a chance to make a sequel called "Office Space 2: Still Renting". But Judge said that he had been through enough anguish over the first one that he didn't want to put himself through the experience again.

Continuity:
When Peter first enters the room with the Bob's to re-interview for his job, he goes to the back to get a glass of water. As he does this, you can see that the chair he will be sitting in is slightly pulled out, yet as goes to sit down, the chair is entirely pushed in.

Peter Gibbons:
That's what I'm talkin' about when I talk about America!

Incredibly true-to-life story about life at work. Anyone who's ever worked
in a large office will find at least one thing, probably more, that they can
relate to.

Look at the characters: From the receptionist with the annoying high-pitched
voice, to the clueless management, to the soft-spoken guy with no backbone
(or so you think), this looks more like a documentary than fiction.

The daily situations of the office environment, including paper jams in the
printer, static electricity, and slow computers, are hilarious for some
reason when they happen to the people in the movie.

Throw in some great acting, a good story, and the humor of Mike Judge, and
you'll find one of the best movies ever made, hilarious from start to
finish.

TagsUSA
I Stand Alone
The Other Sister