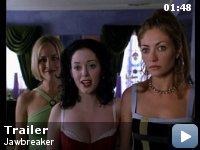 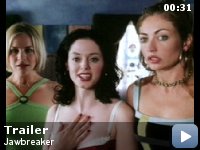 Three of the most popular girls at Reagan High accidentally kill the prom queen with a jaw-breaker when a kidnapping goes horribly wrong.

Storyline
In what was meant as a harmless birthday prank, three of Reagan High School's most popular girls, Julie, Foxy, and Courtney pretend to kidnap their friend, the latter shoving a jawbreaker into the victim's mouth to keep her from screaming. Their plan goes awry when the girl accidently swallows the jawbreaker, choking to death. The cool and calculating Courtney tries to cover the crime but is found out by school geek Fern Mayo. In return for her silence, Courtney transforms the gawky Fern into the stylishly beautiful Vylette, leaving the conscience-stricken Julie out in the cold, threatening to set her up for the girl's murder if she breaks her silence.

During the entire film, a circular theme is visible, to call back to the jawbreaker. From the girls earrings (they wear hoops throughout the majority of the film), to light fixtures, to patterns, and wall fixtures.

Gothic Girl:
[after Marcie has just cracked an egg open in Home Ec. Class and sees blood in the yoke]
Cool! You've got a still-born!

Much like the candy that bears it's name, "Jawbreaker" is a sweet,
infectious dark comedy that wants you to enjoy it for a good, long time.
Unfortunately, also like the candy, the film is a little hard to swallow,
and it doesn't last as long or come on as strong as it's name would lead you
to believe. But even though you know that much candy is bad for you, you
still want to have it.


On her 17th birthday, popular girl Liz (Charlotte Ayanna, here as Charlotte
Roldan), a member of the "Flawless Four," is kidnapped by her best friends
Courtney (Rose McGowan), Marcie (Julie Benz), and Julie (Rebecca Gayheart)
as a prank, her screams muffled by a huge jawbreaker. The prank goes
horribly wrong, however, when Liz chokes to death on the candy. Instead of
going to the authorities, as Julie insists, Courtney devises a massive plan
to cover up the death, a plan discovered by the unpopular and awkward Fern
(Judy Greer). To win her silence, Courtney makes Fern in her own image,
renaming her Vylette and allowing her to hang and commiserate with the most
popular people in school. As Fern becomes intoxicated with her new-found
power, Julie becomes more concerned with her friend's death, and Courtney
spins a devious web of lies and trickery. Enter Detective Vera Cruz (Pam
Grier), the only person who may be able to get to the bottom of the crime.
But what does all this mean for the Prom?

Writer and director Darren Stein as obviously seen "Heathers" a good number
of times. Like that classic film of teen angst, "Jawbreaker" is a dark
comedy set in a high school, featuring an accidental murder of a popular
student. While "Jawbreaker" is certainly more colorful than "Heathers",
both in terms of set design and characters, it also comes off as a pale
imitation. The students live their lives in near-vacuums, with parents
showing up only occasionally, and then only as ineffective or ignorant. The
impact of their actions on the community at large is only hinted at, and as
a result, you never feel as if anything important in the reality of this
film has ever happened.

That being said, the movie is still pretty sweet. Rose McGowan is cruel and
calculating villain, terrifying in her powers of manipulation and
contingency. Julie Benz is the perfect toadie, existing only to buoy
Courtney's already swollen ego. Rebecca Gayheart's warm-natured Julie is a
stark contrast to Courtney's "Satan-in-heels" persona, and Judy Greer is
wonderful to watch as she goes from under-appreciated geek to power-mad
diva. Pam Grier is, as always, a pleasure to watch, even if her role seems
too small. The interactions between her and Rose McGowan are some of the
highlights of the film. A good supporting cast also deserves mention, most
notably Carol Kane as the slightly daffy school principal, Marilyn Manson as
a seedy barfly, and Ethan Erickson as the dumb jock being relentlessly
manipulated by Courtney's sex games.

While the script is full of caustic one-liners, it never succumbs to its own
hipness. The characters are witty, but not nearly as unrealistically urbane
as the characters in movies like "Scream." Some scenes and interactions
come off as gratuitous, and to be sure there are a number of times when
Stein really wants you to notice to how well he paid attention at film
school. But there are a number of scenes that gain new meaning when
analyzed in the larger scheme of the movie, and a repeat viewing may be in
order to catch the full signifcance. You may sometimes get so distracted by
the candy-colored schemes (McGowan's lips alone may send you into insulin
shock) that you'll forget about the plot.

Some may see the movie as derivative, and there are certainly a large number
of detractors. But taken on its own merits, "Jawbreaker" is a fun, giddily
dark comedy that requires more than few licks to get to the bottom of. Just
keep your consumption to a moderate amount, and you'll do fine. 7 out of
10.

TagsUSA
I Stand Alone
The Other Sister